After six decades of groundbreaking musical innovation, the "mad genius" of dub music and self-styled Upsetter has passed away in a Jamaican hospital. Lee 'Scratch' Perry, performing in Manchester in 2017, was still touring well into his 80s

"Music is the only comforter, I'm telling you the truth," said reggae producer and musical light seeker Lee Scratch Perry with preacher-like gusto at the time when he was revolutionizing a new dub sound. Central to the evolution of rocksteady and reggae music — a sound he developed with Bob Marley and the Wailers — Perry later pioneered electronic dub beats that continue to color the contemporary musical landscape to this day.

Following the passing of reggae legend Bunny Wailer in March, news of Perry's death on August 29 at the age of 85 in Jamaica signaled the end of a musical epoch. But the outpouring of tributes indicate that the mad genius' star will continue to shine brightly.

Mike D of the band Beastie Boys, who collaborated with Perry in the 1990s, wrote on Instagram: "We are truly grateful to have been inspired by, worked with and collaborated with this true legend. Let us all listen to his deep catalogue in tribute."

"Few people were as weird or cast as long a shadow as Lee Perry," tweeted rock producer Steve Albini, who worked with bands like the Pixies and Nirvana. "His records were shocking and became talismans for anybody who ever tried to manifest the sound in their head."

Born Rainford Hugh Perry on March 20, 1936 in a poor rural district of Jamaica, the musical prodigy was still a teen when he moved to the capital, Kingston, and began an apprenticeship at Studio One, the label dubbed the Motown of Jamaican music.

There he produced near 30 songs until interpersonal conflicts saw him move to various studios and finally establish his own label in 1968, Upsetter Records — a play on his own nickname, Upsetter, which stuck after his hit song "I Am the Upsetter," released in '67.

His first single on the label, released under the name Lee Perry, was "People Funny Boy," which employed a groundbreaking sample (a crying baby) and a distinctive beat that would become known as reggae.

It sold over 50,000 copies and set Perry on the path to stardom, especially after he built his legendary Black Ark studio and began to collaborate with Bob Marley and the Wailers — the band that would make an obscure Jamaican reggae sound a global phenomenon.

The 'mad genius' of dub music

As a producer for acts from The Wailers to The Heptones, Perry often worked with his own studio band, The Upsetters.

This continued as reggae's founding father developed his inimitable dub sound in the 1970s by employing revolutionary remixing techniques that would later influence hip hop and electronic dance music — exemplified by his 1976 album, "Super Ape."

As author David Katz wrote in his Perry biography, "People Funny Boy": "He has claimed to come from Jupiter, once said he was born in the sky, and has often named Africa as his true birthplace; Perry has additionally suggested that his empty body was taken over by space aliens after his undocumented death."

The iconoclastic Perry was known to enjoy smoking large marijuana cigarettes at concerts around the world as he rose to global fame. In 1980, his pro-pot advocacy was aimed at the Japanese government when he protested the arrest of Paul McCartney for marijuana possession. 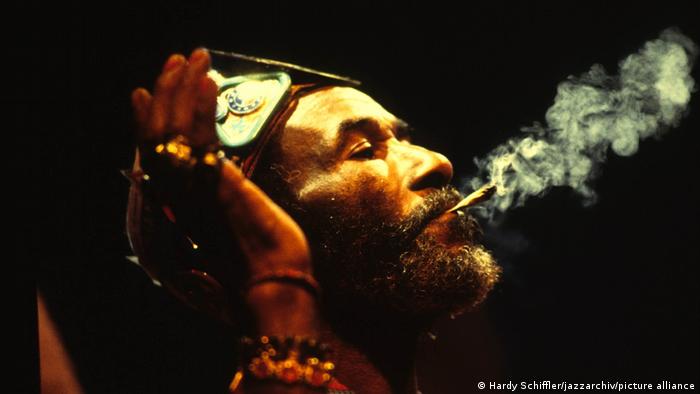 But Perry's personal demons caused his work to suffer. He fell out with Bob Marley, and later claimed that he himself had laid the fire which destroyed his Black Ark studio in 1979 in a fit of rage.

He left Kingston and went into a long exile, living mostly in Switzerland. His career bottomed out until a revival in the 1990s, when he worked with acts such as the Beastie Boys, performing vocals on the song "Dr Lee, PHD," and collaborating with the British dub music producer and protege, Mad Professor.

Then in 2002, Perry's album Jamaican E.T. won a Grammy for best reggae album. He was nominated another four times as he toured the globe.

Perry described his music as "rhythm from the ghetto and music from the streets," and he stayed true to his Jamaican roots, ultimately returning to and dying in the place where his musical odyssey began — and no doubt will continue.

The truth about reggae