The Dutch and French right-wing leaders have held talks aimed at forming a pan-European bloc. Last month, Geert Wilders said he and Marine Le Pen would build ties ahead of next May's European Parliament elections. 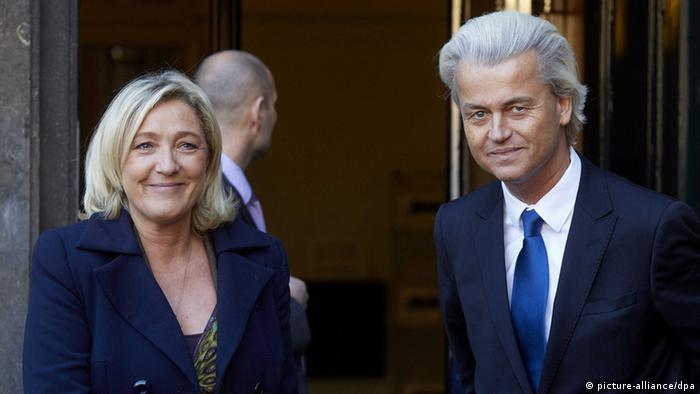 Wilders, who heads the Euroskeptic Party for Freedom (PVV), met Le Pen at the Dutch parliament. Both Le Pen's National Front (FN) in France and Wilders' PVV have expressed interest in uniting right-wing euroskeptic parties as a way to challenge the EU from within.

Wilders has warned that "parties such as the FN and the PVV could make the europhile elite sing a different tune." He added that the FN "has a lot in common with the PVV: less Europe, less immigration." Wilders said he wants to "find common ground and fight together for our own countries and against Europe."

Wilders and Le Pen would have to find like-minded politicians in at least a quarter of the EU's 28 member states and see 25 representatives elected to the 766-seat European Parliament. If they became an official political group, they would benefit from subsidies, offices, a communication budget, seats on committees and speaking time in parliament proportional to their number.

The PVV has four seats in the European Parliament, the National Front three, but they do not sit together at the 766-seat legislature. In the body, lawmakers from different countries generally group together in political blocs such as the European People's Party, made up of Christian Democrats from around the continent, or the Alliance of Liberals and Democrats for Europe.

The existing euroskeptic parliamentary group, the Europe of Freedom and Democracy (EFD), led by Nigel Farage of Britain's UK Independence Party, only has 32 seats. The EFD has ruled out joining the alliance, considering some of Wilders' policies too extreme. For example, he backs taking the Netherlands out of the eurozone and even out of the EU altogether, with the aim of halting immigration.

A Le Pen-Wilders far-right alliance could include the Alternative for Germany (AfD), Belgium's Flemish-dominant Vlaams Belang, Italy's Northern League and the Freedom Party of Austria. The bloc would not include some far-right parties in Central and Eastern Europe, including Hungary's Jobbik and Slovakian, Bulgarian and Romanian nationalist parties because of their perceived overt racism.

After the pair lunched in Paris in April, Le Pen, a member of the European Parliament since 2004, called herself "perhaps less radical" than Wilders on Islam. Acquitted of inciting hatred of Muslims in mid-2011, Wilders has in the past likened Islam to Nazism and the Koran to Hitler's "Mein Kampf." Though Le Pen strongly opposes the religion's presence in public life in France, "I have nothing against Islam in itself," she insisted in a recent interview.

Wilders reportedly wanted to keep his distance until now because of the anti-Semitism of his counterpart's father: FN founder Jean-Marie Le Pen. However, she has banked on Wilders' pro-Israel stance to buff up her own international image, an analyst told the Dutch daily NRC Next.

The PVV performed poorly in 2012's Dutch elections, its seats almost halved to 13, but the party has ridden high in opinion polls. Le Pen took 18 percent of votes in round one of France's 2012 presidential election, the party's highest-ever score.

Austrian village of Fucking decides to change its name 0m ago