Lawmakers have voted to dissolve the Czech parliament, triggering early elections. The country has been mired in political crisis since the prime minister stepped down over a bribery scandal involving his aide and lover. 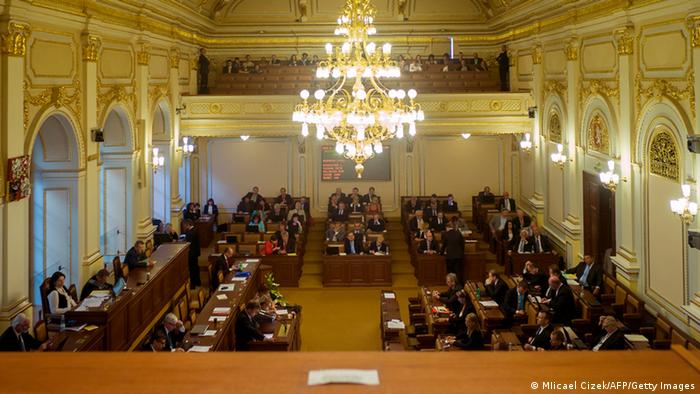 A total of 140 lawmakers of the 147 present backed the proposal tabled by three major parties. It had needed a majority of 120 votes in the 200-seat parliament to succeed. The centrist Social Democrats - the primary opposition party and, according to polls, the most likely to dominate the upcoming snap elections - had called for the vote to dissolve parliament, along with the Communist Party of Bohemia and Moravia and the center-right TOP 09.

Social Democratic party chairman Bohuslav Sobotka and the country's likely next prime minister hailed the outcome as "a clear decision that everyone should respect." He added: "We are giving citizens room to decide about the future of the Czech Republic."

No confidence in Czech PM

The Czech Republic continues to find itself in a political crisis. Parliament has voted against one government but can't yet form another. Meanwhile, experts are concerned about the president's power trip. (08.08.2013)

The right-wing government led by Petr Necas took office after the 2010 parliamentary elections, and fell in June when prosecutors charged the prime minister's lover and chief-of-staff, Jana Nagyova, with bribery and abuse of power. After Necas fell, Milos Zeman - in office since March as the country's first-ever directly elected president - named a Cabinet led by his left-wing ally Jiri Rusnok. Appointed in July, that government lost a confidence vote in parliament on August 7.

Under the constitution, Zeman must now formally approve the dissolution and set an election date to follow within 60 days. He had said last week that, if needed, he would schedule early elections for October 25-26, moving them well up from the planned May 2014.

A poll by the ppm factum agency found that the Social Democrats would garner 21 percent of the vote in an early election, TOP 09 would have 10 percent and the Communists 9 percent. The right-wing Civic Democrats - formerly led by Necas and the only top party not to petition for the dissolution vote - would end up with a mere 6 percent, according to the August 12-16 poll of 1,002 respondents. Such a setup would mean the Communists would end up on the governing side of parliament for the first time since 1990, a year after the collapse of communism in the former Czechoslovakia, which split into the Czech Republic and Slovakia in 1993.