A top court in Latvia has ruled that the country's plan to cut pensions in order to pay for a bailout loan is illegal. 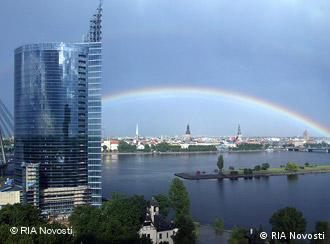 Latvia's constitutional court undermined the country's plans to meet promises to international lenders on Monday when it struck down pension cuts passed by the government as part of Latvia's austerity measures. This move has cast doubt on a crucial International Monetary Fund (IMF) and EU-led 7.5 billion euro bailout for the recession-hit state.

The pension cuts have been in force since July, and constitutional court chief Gunars Kutris says they take away anywhere between 10 and 70 percent of old-age pensions depending on an individual's status. Kurtis said the measures were illegal and that parliament must have measures in place to refund the cuts by March 2010.

"Violation" of social security and rule of law

In its judgement, the court stated that "The decision to cut pensions violated the individual's right to social security and the principle of the rule of law." It added that agreements with international lenders in and of themselves cannot be used as an argument to limit basic rights. The court's ruling in the case is final and cannot be appealed.

The case was brought to the court by 9,000 individual pensioners. It has been ruled that the money itself must be paid back in full no later than 2015. The sum is estimated around 100 million lats (140 million euros).

Currently, Latvia is in the middle of one of the deepest recessions in the European Union, with its economy expected to shrink by up to 18 percent this year. Over the past year, its government has been raising taxes and reducing public spending as it attempts to stick to the terms of the IMF/EU bailout.

The Latvian government has agreed to slash pensions and state sector salaries in a bid to keep the country afloat financially. Riga must cut costs to qualify for more financial aid from the EU and the IMF. (12.06.2009)

In 1989, nearly 2 million people in Latvia, Lithuania and Estonia stood strong against Soviet control. Twenty years later, the former "Baltic tigers" are trying to show courage in the face of recession. (22.08.2009)