The ladies of FFC Frankfurt secured another European crown for the trophy-laden German club. But the Berlin crowd had to wait until almost the last kick to celebrate glory. 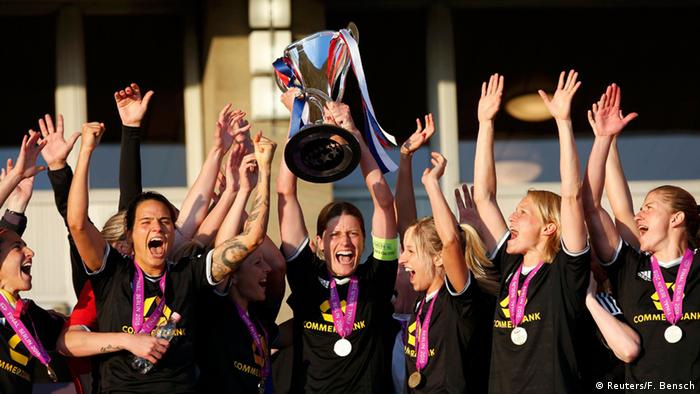 VfL Wolfsburg has won the last two European trophies, whilst FFC Frankfurt went down in the final against French opposition in 2012 and has now secured its fourth Champions League crown - the best record of any club.

Goal-getter Celia Sasic sent Colin Bell's men on their way to Germany's ninth tournament victory, yet they were pegged back by Marie-Laure Delie at the break. But Islacker's late volley turns Frankfurt's season into a success despite missing out on the treble with Bayern Munich taking the league title and the Wolves winning the German Cup.

Frankfurt eager from the start

Frankfurt, winners in 2002, 2006 and 2008, was the favorite of the crowd in the German capital of Berlin with Chancellor Angela Merkel joining UEFA President Michel Platini. Colin Bell's side pressed high up the pitch with the excellent Dzsenifer Marozsan combining with top scorer Sasic.

The first half-chance fell to the feet of Swiss midfielder Ana-Maria Crnogorcevic, whose control let her down with the ball rolling across the 18-yard-line. Bonn-born Sasic was the main threat, though, and a glancing header went past the post on 22 minutes.

Meanwhile, attacking-midfielder Marozsan was beginning to threaten with her runs out into the flanks and her cross in the 29th minute to Simone Laudehr should have been converted. 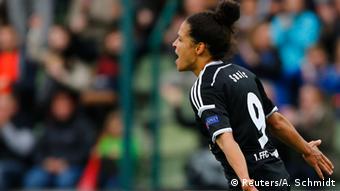 Top scorer Sasic has 14 goals in this season's tournament

But three minutes later, Sasic earned the breakthrough for the Germans who were on top. Kerstin Garefrekes struck off an opponent and with the ball spinning fortuitously in the air the striker netted her 14th goal of this season's Women's Champions League.

The Parisians appeared subdued despite their high-scoring feats in previous rounds. Kenza Dali's shot on 39 minutes from the best part of 40 yards looked more like a sign of desperation for the French club.

Consequently, the resulting corner kick from Dali was turned home by Delie whose potency in front of goal has been key to PSG's Champions League campaign. 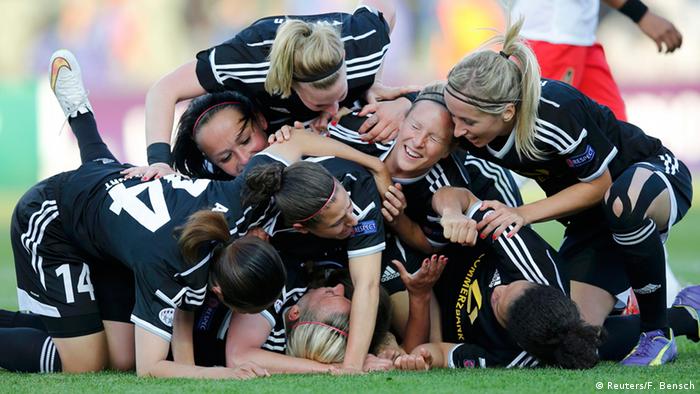 While the second-half was a more balanced contest, the German side carved out the clearer opportunities. Sasic threatened on 48 minutes before the following effort from Spaniard Veronica Boquete was booted off the line by German-born defender Annike Krahn.

Twenty minutes later, in the 68th minute, former Espanyol player Boquete failed to direct her long-range effort at goal on target as the ball sailed over the woodwork.

But in the closing minutes, Bell's side took the title when the ball broke kindly to second-half sub Islacker who directed the ball high and into the net and send their players into raptures on home soil.

Former Leicester City and Mainz player Colin Bell has extended his contract as head coach of Bundesliga Women's team FFC Frankfurt. His side are still in contention for all three competitions this season. (27.02.2015)