Archaeologists have determined the exact date of construction of the Porta Nigra in Trier — it was built 1,848 years ago. It's the oldest monument of its kind in Germany. 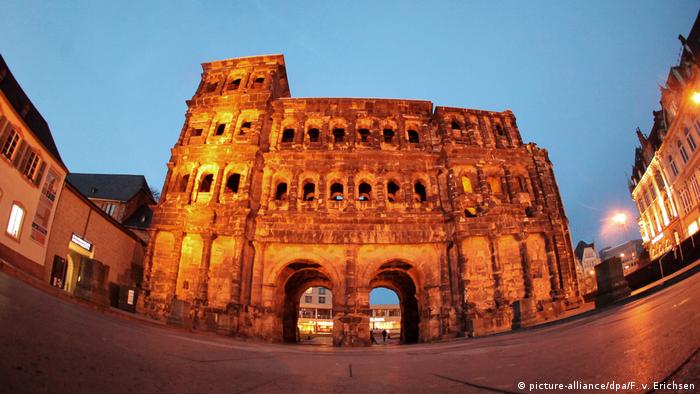 Until now, the date of construction of Trier's Porta Nigra, the largest Roman city gate north of the Alps, could only be estimated. Researchers dated it back to somewhere between 150 AD and 320 AD.

Scientists have now managed to determine exactly when the city gate was built, thanks to ancient wood that was found in archaeological digs. It was built in 170 AD —  or 1,848 years ago.

"This is a milestone in the history of the city of Trier," said the director of Trier's Rheinisches Landesmuseum, as the results of the findings were made public on Friday.

The Porta Nigra (Latin for "black gate") was named that way due to the darkened color of its stone. The largest Roman monument of its kind in Germany, it is part of a UNESCO World Heritage Site ensemble, called the Roman Monuments, Cathedral of St. Peter and Church of Our Lady in Trier.

The fact that the ancient oak wood that was found could be dated to the winter of 169/170 AD was a "stroke of luck," said Mechthild Neyses-Eiden, an expert in dendrochronology — the science of three-ring dating — who led the research at the Trier museum. At the time, wood was used for construction immediately after being felled, she explained.

The hometown of Karl Marx has voted in favor of accepting a giant statue of the German philosopher and economist. Not all of Trier's citizens agree with the controversial gift from China. (13.03.2017)