IMF chief Christine Lagarde has said cheaper oil prices alone won't be enough to see economies around the globe grow faster. Speaking at a think tank in Washington, she urged the ECB to provide more stimulus. 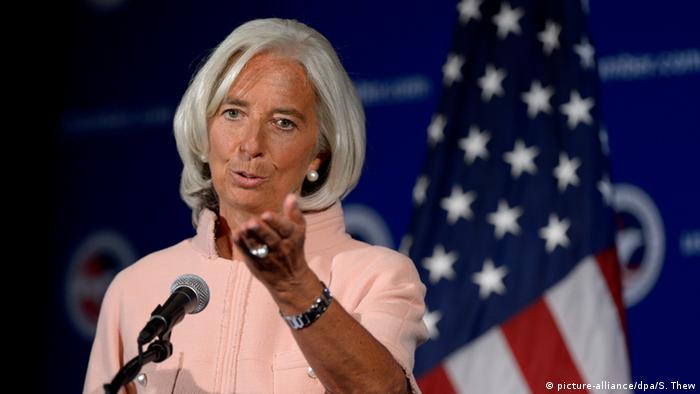 The head of the International Monetary Fund, Christine Lagarde, said Thursday a sharp drop in oil prices and a stronger US economy would probably not be enough to brighten the outlook for global growth in the course of 2015.

Addressing an audience of economic pundits in Washington ahead of the IMF's publishing of the most recent edition of its twice-yearly Global Economic Outlook, Lagarde said the US would most likely be the only major economy to buck a trend of weakness in investment and consumption affecting most developed countries and some emerging economies as well.

"A shot in the arm [from lower oil prices] is good, but if the global economy is weak and on its knees, it's not going to help," the IMF Managing Director said.

All eyes on the ECB

Turning to the eurozone, Lagarde encouraged the European Central Bank (ECB) to unleash fresh stimulus as the single-currency area remained at risk of settling into a long period of weak growth and ultra-low inflation that is coming perilously close to actual deflation.

Her remarks came as the ECB prepared financial markets for an imminent program of large-scale sovereign bond purchases, or quantative easing – aimed at countering deflationary worries.

Christine Lagarde also expressed concern about slowing growth in some emerging economies, with stagnation in Russia, Brazil and Indonesia, and even a slightly lower growth rate in China compared to past years.

Asked about the Swiss National Bank's decision to end its bid to hold down the value of the franc against the euro, the IMF chief said she would not comment the move, saying only that she hoped the measure had been communicated to other central banks ahead of time, although she didn't know of any such coordination. Nor had the IMF been warned, she added.