Carmaker Volkswagen could become the next venue for strikes after personnel chief Peter Hartz called for a two-year wage freeze on Monday. 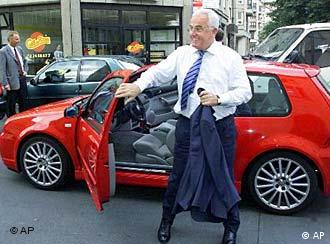 Once known for its innovative approach to personnel problems, Europe's leading car manufacturer may be on a collision course with trade unions. Human resources head Peter Hartz announced Monday that employees would have to engage in belt-tightening measures and accept a wage and salary freeze for 24 months as well as more flexible working hours.

"There is no scope for pay increases," Hartz said at a news conference in Wolfsburg, where the company has its headquarters. "We cannot close our eyes to the worldwide competitive situation … The European automotive market above all is discouraging. In Germany, in particular, after years of stagnation there are still no signs of recovery," said Hartz, who is also author of German labor market reforms currently being implemented federally to the tune of mass protests.

Pay talks for the 103,000 employees at VW's six German plants are merely weeks away. Last week, powerful trade union IG Metall said it would demand a 4 percent increase in wages and salaries and guarantees that jobs will be retained for 10 years. Already, union representatives have deemed Hartz's plans excessive and unrealistic.

All told, VW aims to cut current personnel costs of €6.8 billion ($8.3 billion) by around €2 billion by 2011. Hartz said that compared to its most important competitors, VW had a significant disadvantage in terms of personnel costs at its German plants. But he said in return VW would voluntarily commit to retaining its more than 176,544 in the country.

Just over a month ago, DaimlerChrysler settled a labor dispute that was accompanied by two weeks of protests and strikes. The German-American car maker had threatened to shift 6,000 jobs from its Sindenfingen plant near Stuttgart to other locations in Bremen and South Africa if workers did not agree to trim costs saving the company €500 million annually. Instead of pursuing pay increase demands, workers accepted reintroduction of the 40-hour work week and pay cuts, while receiving a seven-year guarantee of no lay-offs.

Hartz's seven-point plan includes linking 30 percent of pay to performance and only paying overtime to employees who work more than 40 hours a week, rather than the current 35 hours. Paid breaks and training periods would also be eliminated. Each employee would have an annual account of working hours to allow the company to occupy workers more flexibly.

VW has seen its profits slump in 2004, which the company has blamed on an overall downturn in the international car market. Earnings were down more than 35 percent in the first six months of the year.

Ready for a fight

IG Metall said employees should not be punished for managers mistakes. Hartmut Meine, who is due to lead the union's negotiations with VW, defended salary increases. "As long as VW can pay a dividend, the employees must also take part in the company's success," he said.

With 97 percent of VW employees represented by the union, Meine remained optimistic that VW employees would present a strong front against the company.

"We're a good soccer team and face a difficult away game," he said.

Siemens two weeks ago, DaimlerChrysler this week. The threat of moving jobs elsewhere has become an increasingly powerful weapon for industry at the negotiating table. Unions are alarmed. (July 14, 2004)

Volkswagen's new minivan is the product of an innovative program to link wages to profits and demand while creating new jobs. But critics say it is creating an employee underclass. (Jan. 14, 2003)

German carmaker DaimlerChrysler reached a cost-cutting deal with workers Friday, securing 6,000 jobs at a plant near Stuttgart. The firm's top managers will contribute to the savings by giving up part of their salaries. (July 23, 2004)