Kunduz victims to sue Berlin for compensation | Germany | News and in-depth reporting from Berlin and beyond | DW | 01.09.2011

A NATO airstrike called in by a German colonel in northern Afghanistan two years ago killed dozens of civilians. Now their lawyer is demanding thousands of euros in compensation from the German government. 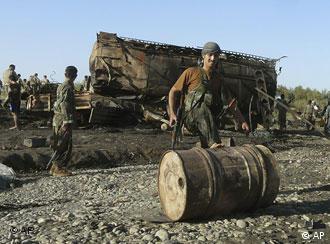 A day after the airstrike, the tankers were mere shells

The families of the victims of a NATO airstrike that killed scores of people in Afghanistan two years ago are planning to sue the German government for damages.

According to Germany's armed forces, 91 civilians were killed and 11 others wounded in the airstrike that was intended to take out Taliban insurgents in the Kunduz region of northern Afghanistan in September 2009.

Karim Popal, a lawyer who represents the families of more than 70 of the victims, told reporters in Berlin on Thursday that he planned to file the suit in the state court in Bonn next week.

The airstrike came at the request of German Bundeswehr Colonel Georg Klein, after two fuel tankers had been captured the Taliban. Klein called for the strike in the fear that the insurgents could use the fuel trucks to attack a nearby German base. 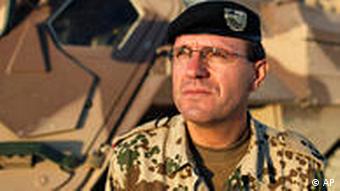 Popal argues that not only is this sum far too low, but many of the victims' families haven't yet received a cent, as the German government asked regional leaders and warlords in Afghanistan to distribute the funds.

Popal, who now lives in Bremen but was born in Afghanistan, believes resolving the compensation issue is important not just for the victims' families, but that it's also in Germany's interest.

"I've been trying very hard to prevent the families of the dead civilians from calling for revenge, or from joining the Taliban in protest at the injustice done to them," he said.

"I've told them many times that German authorities would settle the matter in their interest. But we lawyers have been treated badly by the Defense Ministry. So we've decided we'll have to take the matter to court."

He says he has documentation to prove that Germany usually pays between 20,000 and 33,000 euros in similar cases. Therefore, he argues, the compensation paid out to the victims of the Kunduz airstrike should fall into this range.

The German opposition has accused members of the military and government of poor judgment in the Kunduz airstrike that killed scores of people in northern Afghanistan in 2009, in two new reports to parliament. (11.08.2011)

German Chancellor Angela Merkel and her former Foreign Minister Frank-Walter Steinmeier face questions on a military airstrike that killed dozens of civilians in Afghanistan in September 2009. (10.02.2011)