Kuchma For New Election in Ukraine | Europe | News and current affairs from around the continent | DW | 29.11.2004

Kuchma For New Election in Ukraine

Outgoing President Leonid Kuchma said Monday that he was in favor of staging new elections in Ukraine to resolve a bitter dispute over a Nov. 21 presidential vote won by his pro-Moscow prime minister. 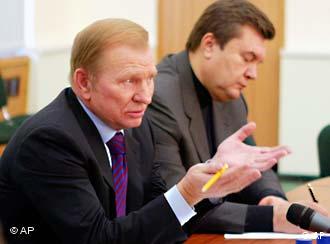 Kuchma, left, warned that Ukraine's economy is suffering from the crisis

"If we really want to preserve peace and agreement in Ukraine, and really want to build a legitimate democratic society that we so often talk about... then let's hold new elections," Kuchma said in televised remarks.

Kuchma said he was ready to seek new solutions to the crisis even if this meant stepping outside the standard procedures for resolving such standoffs.

"The situation we find ourselves in today in Ukraine demands not only strictly legal decision, but also political decisions," Kuchma said.

Ukraine has been swept up in turmoil for more than a week by mass opposition street protests against alleged fraud in the poll, which was officially won by the pro-Russian Prime Minister Viktor Yanukovych. 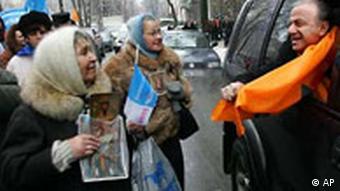 The supporters of rival presidential candidates taunt each other outside the Ukrainian Supreme Court in Kiev, Ukraine, on Monday, Nov. 29, 2004.

Ukraine's supreme court Monday began reviewing a request by opposition leader Viktor Yushchenko to annul the results due to alleged ballot fraud. The parliament has supported annulling the vote in a non-binding resolution.

As pressure mounted on the pro-Russia camp, with opposition demonstrators blocking government buildings and taking over central Kiev, Yanukovych appeared to have relented somewhat. He said Monday that even though he thought it would be illegal, he would agree to a new vote being held in two districts in eastern Ukraine where turnout was suspiciously heavy in his favor.

The elections have threatened to split Ukraine in half, with Yushchenko vowing to pull Ukraine out of Russia's orbit and placing the former Soviet republic in the European Union's fold and possibly even joining the NATO military alliance.

On Sunday, officials from more than half of Ukraine's 27 regions, representing two-thirds of the population of 48 million, held a summit at which they announced plans to hold referendums on Dec. 12 on autonomy from the central government.

The eastern coal mining region of Donetsk, which is responsible for nearly a quarter of Ukraine's industrial output, plans to hold its own autonomy referendum Sunday.

With some powerhouse eastern regions halting payment of taxes to the federal coffers and trade disrupted, Kuchma said the more than week-long dispute over contested presidential elections was paralyzing the ex-Soviet country.

"Another few days and the financial system could fall down like a house of cards," Kuchma said in a meeting with Yanukovych. ´

"It is clear today that unremitted taxes have reached a billion hryvnas (€150 million, $200 million). Customs duties have fallen by a quarter," said Kuchma, according to a statement from the president's office.

Economists warned that the longer the crisis persisted and the greater the threat of secession, the more damage would be suffered by the Ukrainian economy, which powered ahead more than 12 percent over the first nine months of the year.

"The situation is such today that the economy is hostage to the political situation," said Andrei Blinov, head of the International Center for Policy Studies.

In other side-effects, for the last six days trading has been disrupted on the Kiev stock exchange while the number of freight lorries entering the country has dropped to a third of the usual level.

Ukraine's supreme court will convene Monday to hear an opposition appeal that the presidential election was rigged in favor of pro-Moscow Premier Viktor Yanukovych, amid threats that the country could split in two. (Nov. 29, 2004)

Ukraine's pro-Russia regions threatened Sunday to split off from the European-leaning west of the country as a disputed vote has left Moscow and Western capitals glowering at each other across a Cold War-like divide. (Nov. 28, 2004)

Here's a brief rundown of how the crisis in Ukraine developed during the election campaign that pitted Prime Minister Viktor Yanukovych, a pro-Moscow politician, against pro-Western opposition leader Viktor Yushchenko. (Nov. 28, 2004)