Kosovo Independence: What Can the World Expect? | Europe | News and current affairs from around the continent | DW | 18.02.2008

Kosovo Independence: What Can the World Expect?

Kosovo's declaration of independence has already sent tremors through the international community. DW-WORLD.DE spoke to Balkans expert Stefan Wolff about what Kosovo and the world can expect in the near future. 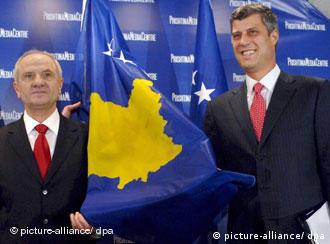 Stefan Wolff is a professor of political science and director of the Centre for International Crisis Management and Conflict Resolution at Nottingham University in the UK. He has extensive expertise in Northern Ireland, the Balkans and Central and Eastern Europe, and has also worked on a wide range of other conflicts elsewhere, including the Middle East, Africa, and Central, South and Southeast Asia.

DW-WORLD.DE: Is Kosovo prepared for independence in terms of infrastructure, governance, security and stability?

Stefan Wolff: Kosovo has most of the important institutions of statehood and democratic governance in place, but at the same time these institutions will require continued international support for some time. This is accepted by both the Kosovars and the West and is the background against which we need to understand the EU mission for Kosovo -- as external assistance to consolidate existing institutional structures to enable Kosovars to take care of developing their economy, infrastructure and ensure security and stability.

The decision to declare independence is not a unanimous one within the population. What minorities in Kosovo have most to lose from this independence?

In principle, all minorities and the majority Albanian population can gain from the clarification of Kosovo's international status, not least in the sense that they will all benefit from economic development. Prime Minister Thaci made some very important gestures yesterday towards reconciliation with Serbs in Kosovo. The Arthisaari plan offers important mechanisms to Serbs to preserve and develop their identity, gives them opportunities to play a meaningful part in the political process in Kosovo and retain ties with Serbia. From this perspective, there is no need for conflict between the two main population groups, but that does not mean that extremists on either side will refrain from violence and provocations. So far, this risk has been contained, but not eliminated.

What can we expect in terms of reaction and action from Kosovo's Balkan neighbors? 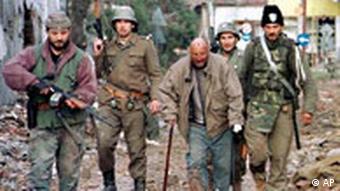 Few of the region's conflicts are fully resolved

The Balkan region as a whole remains quite vulnerable to the threat of ethnic conflict. We must bear in mind that few, if any, of the conflicts that led to bloodshed throughout the 1990s have really been resolved. We have institutions in place now that help manage these conflicts politically, but tensions in Bosnia and Macedonia, for example, remain. Apart from Albania and Slovenia, I don't think that any of the other Balkan countries will find it a very easy decision to recognize Kosovo. Eventually, however, Macedonia, Bosnia, Croatia and Montenegro will recognize the independence of Kosovo, but this will not be a process free from domestic debate.

How will Kosovo's independence affect the wider Balkan region?

Because of the close links between Kosovo and two other major previous secessionist conflicts -- Bosnia, the Serbs, and Macedonia, the Albanians-- there is a danger that violence in and around Kosovo could spread and create instability across the Balkans. There also remains an open question in relation to the future of Albanians in Southern Serbia. The overall hope, of course, remains that with Kosovo's independence the last major unresolved issue has been tackled and that the region as a whole can now move forward to closer integration with the EU. While this will not be easy over the coming months, eventually a sense of reality will set in, and people will realize that this is there only real hope for the future.

Serbia has vowed not to recognize an independent Kosovo and has spoken of economic and diplomatic sanctions. What can we expect from Serbia in the coming days? 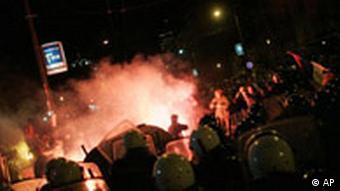 Riots broke out in Belgrade after Kosovo's declaration

There are already signs of Serbia backing down from the quite exaggerated threats of cutting diplomatic ties with any country recognizing Kosovo. This is simply not feasible for Serbia, especially as the population there still has clear aspirations of EU membership and very strong economic interests both in the EU and the neighboring region. We will, however, see further declarations and statements against Kosovo's independence and against its recognition by other states. Together with Russia, Serbia is most likely to try and mobilize the UN against Kosovo's unilateral declaration of independence, and membership in the UN and other international organizations will be very difficult to obtain for Kosovo because of Serbian resistance.

While the likelihood of a military conflict is close to zero, there remains a threat of localized violence in and around Kosovo, but serious escalation is in nobody's interest. Moreover, Serbia has to think carefully about how to manage its relations with Serbs in Kosovo. The Arthisaari Plan offers many important opportunities to do so, opportunities that Kosovo Albanians are ready to accept. Discouraging Kosovo Serb political participation in Pristina will not be in the interests of Serbs living there, and might further encourage them to leave rather than to stay.

What action do you expect to be taken by the international community in the coming days?

We will gradually see recognition of Kosovo as an independent state from major countries in the EU and the West more generally. We should also expect support from the Arab League and member countries of the Organization of the Islamic Conference. NATO will have to be very alert towards any risk of violence in Kosovo, not least in order to assure Serbs that they can remain in Kosovo and participate in building a democratic state. Russian opposition, on the other hand, also remains a clear fact, and Russia will use its membership in the UN, and possibly the OSCE and Council of Europe, to mobilize against Kosovo's independence. This, in turn, could have a further negative impact on relations between Russia and the West as a whole, again not something in either Russia's or the West's interests.

Is Kosovo becoming a pawn in the current power games between the West and Russia? If so, how will an independent Kosovo affect relations? Russia, Serbia's ally, remains in opposition to the west

Kosovo has, for some time, been one among several pawns in these power games. Now that independence has been declared, the issue has come to a head, but at the same time Kosovo will gradually become less of an issue, precisely because a decision has been made. Russia may choose not to recognize it and bring it up before the Security Council and elsewhere, but it was in particular Kosovo's unresolved status that gave Russia a certain degree of leverage. In the long term, I think interest in Kosovo will fade, especially if the transition to independence is smooth, no major violence occurs, and Kosovo quickly gains recognition from a large number of countries beyond the core Western powers.

What will the newly independent Kosovo's view be towards the European Union and the West?

Kosovo Albanians remain the most pro-European and pro-Atlanticist of all the Balkan people. The challenge for Prime Minister Thaci and President Sejdiu will be to prepare Kosovo politically, economically and socially for closer links with the EU and to overcome resistance within the EU from countries like Cyprus, Greece, Romania, Slovakia and Spain who fear that Kosovo sets an unwelcome precedent for secessionist threats that they themselves perceive. From that perspective, Kosovo and its supporters in the EU have a unique responsibility and opportunity to demonstrate that Kosovo can develop into a full European, democratic state and that its independence does not lead to the instability and insecurity feared by some.

Not all EU countries are in favor of an independent Kosovo -- how is the declaration likely to affect relations within the European bloc when the official EU line will be one of overall support? 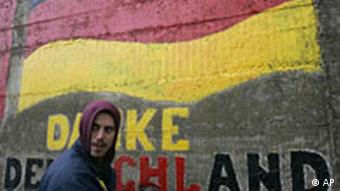 Some countries have expressed concern and reservations, primarily because of their own domestic situation. On the other hand, none of them can have a real interest in risking the EU's ability to act swiftly and decisively over the Kosovo issue. This is not least the case because, apart from the EU in cooperation with NATO, there really is no other international actor willing and able to manage Kosovo's transition to independence. Thus, my hope is that despite some countries' reluctance to recognize Kosovo, none of them will be foolish enough to sabotage the EU's efforts to maintain stability in Kosovo and the wider region and enable the region to forge ever closer ties with the bloc as a whole.

What are the best and worst scenarios arising from this declaration of independence: for Kosovo, for the Balkans, for the EU and for the relationship between East and West?

The worst-case scenario would be one of wide-spread violence in Kosovo, triggering instability in Macedonia and Bosnia and an EU and NATO unable to manage these threats. Also, a prolonged delay in sufficient levels of international recognition of Kosovo leading to insufficient economic recovery there, and continuing strains between Serbs and Albanians in Kosovo are unlikely to be helpful to demonstrate that Kosovo as an independent state can succeed politically, economically and socially without destabilizing its neighborhood. The more negative local developments, the more likely also is it that relations between east and west will remain difficult and impact on other major challenges in the international arena -- from the Middle East conflict, to nuclear proliferation in Iran and North Korea, to continuing bloodshed in Africa.

As a best-case scenario, Kosovo will remain stable, its development will take off, Serbs will gradually begin to participate in the political process, the Balkans will become more integrated into the EU, and the current level of international tensions over Kosovo will quickly die down. This is a tall order, and one would have to be very optimistic to see any, let alone all of this, happen very soon, but neither is there any reason to see the future as bleak as the worst-case scenario.

Calling it "illegal," Russia and Serbia stepped up their efforts to annul Kosovo's independence Monday, Feb. 18 with both countries calling emergency sessions of parliament to discuss their next moves. (18.02.2008)

US, Germany Cautious on Kosovo as Separatists Call for Action

The United States and Germany issued statements suggesting they would recognize Kosovo's independence but gave no official blessing. Meanwhile, fears of knock-on separatist action increased with unrest in Bosnia. (18.02.2008)

What effect do you think Kosovo's independence will have on relations between east and west? Please include your full name and country with any reply.