Knut fans protest plans to display him after death | Germany | News and in-depth reporting from Berlin and beyond | DW | 04.04.2011

Grieving Knut fans gathered in front of the Berlin Zoo Saturday to protest plans to stuff the late polar bear. An investigation has determined that Knut drowned in his pool after suffering a virus-induced brain spasm. 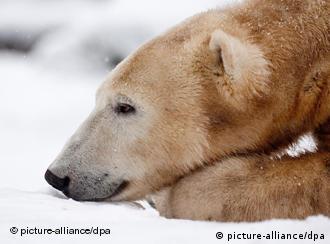 Dozens of grieving Knut fans gathered in front of the Berlin Zoo Saturday, protesting plans to stuff the late polar bear and put him on display in a museum. The protesters held a candlelight vigil and released 50 white balloons.

"Our primary goal is to prevent Knut from being stuffed," said Jochen Kolbe, one of the organizers of the demonstration.

Ferdinand Damaschun, the director of Berlin's Museum of Natural History, has said it was conceivable that Knut's remains could be preserved and put on display in an exhibition about climate change.

"It's only about money," said a 25-year-old protester who identified herself as Nadine. "They're trying to get even more money out of a dead animal. I just don't think it's right."

However, Damaschun clarified that Knut will not be stuffed. Instead, he is set to be preserved through dermoplastic.

Two weeks after Knut’s death, investigators have determined the cause of the four-year-old's untimely demise.

According to the Leibniz Institute for Zoo and Wildlife Research (IZW), Knut suffered a virus-induced brain inflammation that generated muscle spasms which caused him to fall from his perch and drown in his enclosure's pool.

Claudia Szentik, pathologist with the IZW, said that the inflammation in Knut's brain was so massive that "he would have died sooner or later."

Although Knut showed no signs of stress, IZW President Heribert Hofer explained that wild animals can bear a large amount of pain without outwardly showing it.

The Berlin Zoo plans to build a bronze statue to commemorate the world-renowned polar bear that was visited by 11 million people during his lifetime.

Knut shot to fame after being abandoned by his mother and hand-reared by keeper Thomas Dörflein.

The autopsy of polar bear Knut, who died at a Berlin zoo, suggests he died of brain disease. The bear became a global media sensation when he was hand-raised by zoo keepers after being rejected by his mother. (22.03.2011)