Killer Convicted, Police Under Fire for Torture | Germany | News and in-depth reporting from Berlin and beyond | DW | 29.07.2003

Police threatened to torture a law student declared guilty of killing the 11-year-old son of a banker's family. His lawyer says Germany's highest court will overturn the conviction due to the torture threat. 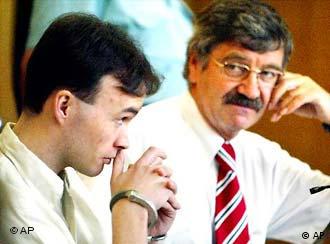 Fifteen years to life: convicted killer Gäfgen and his lawyer plan to appeal.

A controversial trial came to an end in Frankfurt on Monday when 28-year-old Magnus Gäfgen was pronounced guilty of abduction, murder and blackmail. The law student was sentenced to life in prison for murdering 11-year-old Jakob von Metzler, the son of a prominent Frankfurt banking family. But the fact that local police squeezed a confession out of Gäfgen by threatening to torture him was irrelevant, Judge Hans Bachl told the court.

"With the threat of torture the police did grave damage to the rule of law of this country," Bachl said in his concluding statement. "Their guilt, however, has nothing to do with Gäfgen's guilt." 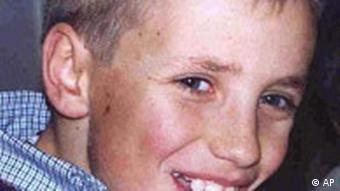 Gäfgen kidnapped Jakob von Metzler (photo) on Sept. 27, 2002, as the boy was on his way home from school. The same day he suffocated Metzler, he demanded €1 million from the Metzler family for the boy's release, which they paid. The police, who had been observing Gäfgen for days, arrested him at the Frankfurt airport. While interrogating Gäfgen, Deputy Police President Wolfgang Daschner threatened to have a martial arts expert hurt the suspect if he didn't reveal where Metzler was being held. Gäfgen then told the police where he had hid the child, who was already dead at the time.

The disclosure in late January that Daschner had threatened to manhandle Gäfgen opened up a public debate about police employing torture, which is illegal in Germany and can be punished with up to ten years in prison. Daschner and another policeman were temporarily suspended. An investigation into the allegations has not yet been completed.

On the first day of the trial against Gäfgen, in April, the court drew a line under the affair and declared all Gäfgen's previous statements "null and void." Two days later Gäfgen again issued a confession, this time one that the court could accept without the taint of having been forced under the threat of torture.

But Gäfgen's lawyer, Hans Ulrich Endres, said the court's actions had not resolved the matter. In his address to the court, he called on it not to highlight the gravity of Gäfgen's crime because of the torture threat. Endres said the court should thus signal to police that they were obliged to observe the letter of the law.

Judge Bachl stressed that the police's behavior could not minimize Gäfgen's crime. Gäfgen would have most likely been declared guilty of murder even if he had not repeated his confession, the judge said.

Defense lawyer Endres has indicated the matter will not yet be laid to rest. Shortly before the verdict was pronounced he said he would appeal to Germany's highest court, the Constitutional Court in Karlsruhe, to overturn the decision. "If Karlsruhe concedes my point, Magnus will be free in three years and he will be entitled to compensation for wrongful imprisonment," Endres told the newsmagazine Focus.

The 11-year-old son of a prominent banker in the financial metropolis Frankfurt was found dead on Tuesday after a four-day kidnapping ordeal. The case is the latest in a history of high-profile abductions in Germany. (Oct. 3, 2002)

Authorities in Frankfurt, Germany, were ready to resort to violence in an attempt to solve a kidnapping case. And some groups are upset that the ban on torture should ever be called into question. (Feb. 24, 2003)

Tuesday’s German newspapers commented on the continuing violence in Iraq, the tentative steps towards peace in the Middle East and allegations of police brutality in a trial of a German law student accused on murder. (July 29, 2003)