US Secretary of State John Kerry says he's reached an agreement with President Hamid Karzai for a security pact for Afghanistan beyond next's year's NATO withdrawal. The deal covers the presence of US troops beyond 2014. 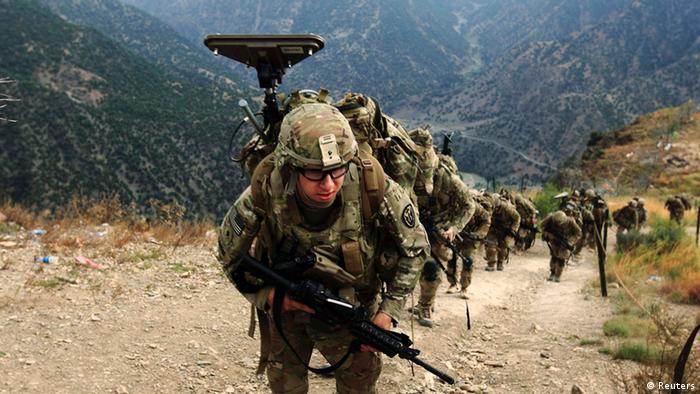 Kerry said late Wednesday that he and Karzai had agreed on the final language of the bilateral security agreement after months of negotiations.

"As we sit here tonight and we have agreed on the language that would be submitted to the Loya Jirga, but they have to pass it," Kerry said of the draft plan which will be voted on by Afghan elders.

Approval from the more than 3,000 elders is not guaranteed and the group can revise or reject any part of the proposal.

Jirga decides over future of US troops in Afghanistan

The Loya Jirga will soon meet in Kabul, Afghanistan, to discuss a bilateral security agreement with Washington, which will effectively decide the future of US troops in the country. (19.11.2013)

Kerry said the US role in Afghanistan after the NATO combat mission ends next year would be "limited," but he did not say exactly how many troops would remain in the country.

"It is entirely train, equip and assist. There is no combat role for United States forces, and the bilateral security agreement is a way to try to clarify for Afghans and for United States military forces exactly what the rules are with respect to that ongoing relationship," said Kerry at a press conference with Defense Secretary Chuck Hagel and Australian officials in Washington.

The draft plan calls for US forces remaining in Afghanistan after the scheduled withdrawal to be subject to US courts rather than the local justice system – a key sticking point in the lengthy negotiations.

He added there was "no discussion" of the US apologizing for civilian casualties during its 12-year campaign in Afghanistan.

"I honestly don't know where the idea of an apology started," he said. "But let me be clear: President Karzai didn't ask for an apology. There was no discussion of an apology."