Kepler-452b: 'Our imagination is one step ahead of us'

Kepler-452b is being hailed as "Earth's older cousin." But Heike Rauer, a researcher at the German Aerospace Center, says we have too few facts to call the planet's discovery a milestone for space science. 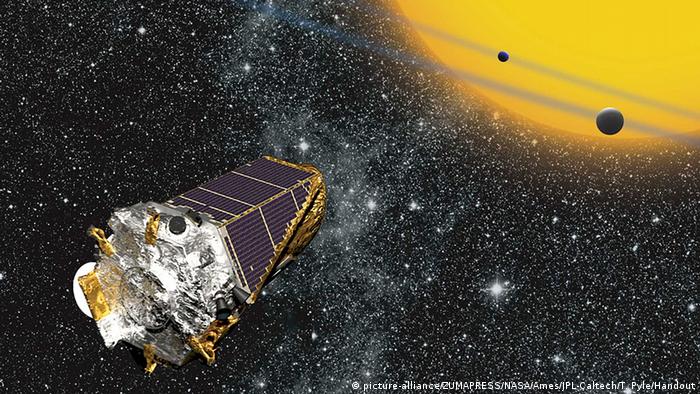 Deutsche Welle: People say that the newly discovered Kepler-452b is an "Earth-like planet." What exactly does that mean?

Heike Rauer: It means it has to have characteristics similar to those of our Earth. It has to be a planet made up of rock, it has to have an oxygen atmosphere that would make life there possible, and there has to be water on its surface. It also has to have the right distance to its star - just as long as the one between our Earth and the sun - and its orbital period has to be roughly one year.

We know it's 1.6 times the size of Earth and that its orbital period is 385 days long. That's pretty similar to our Earth year. Its star is similar to the sun, as well, and the distance between the two is roughly the same as the Earth-sun one.

The US researchers that discovered this planet estimated its size based on statistical and theoretic calculations. They said that the possibility for it to be made of rock lies at 50 percent - but it could also be a gas planet. We don't know if Kepler-452b even has an atmosphere and what that could consist of.

A new discovery by astronomers doubles the number of known planets that could support life. Some of the researchers believe it is only a matter of time before we find life beyond the Earth. (07.01.2015)

How can we find out more in the near future?

We have to take it step by step. The Kepler satellite showed us that it's possible to discover a planet so far away. I'm excited about that, because we want to establish the follow-up mission to Kepler, the European PLATO (Planetary Transits and Oscillations of stars) mission, which will lift off 10 years from now.

So, we want to basically do the same as Kepler, but we want to find planets with stars that are bright enough for us to be able to calculate their mass and not make estimates. This way, we'd be able to figure out whether they're made of rock. And, then, a satellite mission would have to measure their atmosphere.

Is the discovery of Kepler-452b a milestone in space research or is it merely an also-ran?

Well, it's progress. It's a planet that is - possibly - made up of rock, whose orbit is really very similar to Earth's orbit. Aside from that, though, there's not much more that we know. For me, a milestone would be to say, "We don't just know the size of the planet, we also know the mass." But we're just not there yet with this one.

What do you think of the media coverage? The discovery of Kepler-452b was widely celebrated.

With the media, it's like this: Speculation is more exciting than the cold, hard facts. It's a little sad that so many are crying wolf now, because then the news we expect to get over the next decades will seem less exciting.

Once we're actually sure that we've found an Earth-like planet - one definitely made up of rock with sure signs for an oxygen atmosphere - people will remember the many, many other Earth-like planets that were reported on. That's a shame, of course. Our imagination is one step ahead of us right now - but maybe that's just human.

Taking this a step further - how probable do you think it is for life to exist on the newly discovered planet?

One group thinks it's highly improbable, because too many factors need to come together for this. Others say, "Why not?" Since, on Earth, life always finds a way, in every last niche.

I do believe it's a possibility. Maybe I simply want to think it's improbable for us to be alone. But what I find really fascinating is that we can actually start looking into this.

That's the true milestone. You have to remember that we are the first generation in humankind that really knows there are planets outside of our solar system. With technology advancing the way it does, we'll be able to answer this question in the not-too-distant future.

And will we ever be able to travel to Kepler-452b?

No. This planet is more than 1,400 light years away. Since we can't travel even remotely as fast as light, it's too far away from us. Reaching this planet would take many millions of years. Unfortunately, that makes it harder to learn about these systems.

Heike Rauer is the director of the department of Extrasolar Planets and Atmospheres at the German Aerospace Center's Institute of Planetary Research. She's also head of the instruments consortium of the PLATO mission. The European Space Agency (ESA) selected this mission in 2014. Starting in 2024, it intends to send a space telescope out to look for a second Earth.