A "rogue officer" shot dead his wife and five other people before he killed himself, police said. The shooting is the latest incident highlighting police brutality in Kenya. 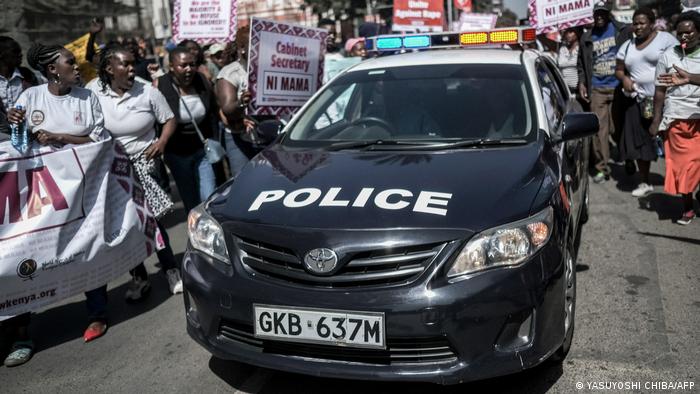 In this image from 2018, police officers drive a car as women gather during a protest

At least six people were shot dead by a police officer in Nairobi before he turned the gun on himself, Kenyan police said on Tuesday.

"We have lost six people all shot by the police officer before he committed suicide," area police chief Francis Wahome said.

Two other people were injured in the rampage and have been admitted to the hospital.

The incident triggered protests as mourners demanded compensation for relatives of the victims.

The protests descended into unrest, and a mob burned tires and blocked a major highway before police were able to disperse the angry residents.

Kenyan authorities said the "rogue officer" first shot his wife with an AK-47 rifle and then went to fire indiscriminately at their neighbors in a low-income area in the Kenyan capital.

Three of the men that were killed were mourners who had just attended preparations for a funeral, the police Directorate of Criminal Investigations (DCI) said.

"After killing the three, the cop then turned his rifle on two boda boda (motorcycle) riders, one of whom lost his life while undergoing treatment," police said.

The Kenyan police force is considered the most corrupt organization in the East African country, according to the international anti-corruption organization Transparency International.

Last month, a police officer opened fire on his colleagues in central Kenya, fatally shooting one in the head before fleeing.

In a similar incident, a paramilitary officer killed one of his superiors in western Kenya in March after a dispute over deployment. The officer then committed suicide.

In 2010, a police officer in Siakago town, 120 kilometers (74 miles) northeast of Nairobi, shot 10 people dead in a rampage through two bars before surrendering to police.

Police Brutality across the African Continent

This week we focus on police brutality across the continent. How do young Africans perceive police - as friends or foes?