Kenya's Supreme Court has ruled against candidate Raila Odinga's challenge to the outcome of last month's presidential election. Odinga had alleged electoral fraud after his opponent William Ruto was declared the winner. 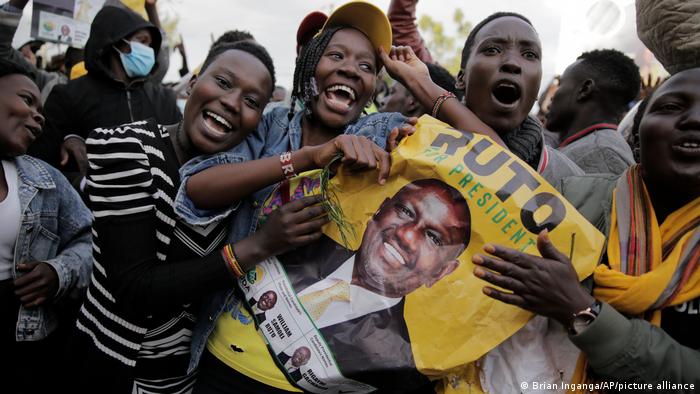 Ruto supporters celebrated the announcement of his victory, by a narrow margin, last month

The Kenyan Supreme Court on Monday ruled against petitions from presidential hopeful Raila Odinga that challenged results that showed his opponent William Ruto was victorious in the country's August 9 election.

In a tightly fought race last month, Deputy President Ruto was declared the winner by a narrow margin of less than two percentage points against veteran opposition politician Odinga.

"I extend a hand of brotherhood to all my competitors and to all their supporters. We are not enemies, we are Kenyans," Ruto said following the decision. "Our election and judicial institutions have won."

He will be sworn in on September 13.

What was the court asked to decide on?

Odinga filed petitions claiming he had "enough evidence" to show that he was the real winner of the August 9 election.

He had described the handling of the election results by the Independent Electoral and Boundaries Commission (IEBC) as a "travesty."

The Supreme Court was asked to decide if there had been interference with polling station returns, and whether the postponement of gubernatorial and legislative elections had put any candidate at a disadvantage.

Chief Justice Martha Koome, who led the seven-member bench, began reading out the verdict shortly after midday local time, listing the court's response to the nine issues underlining the case.

Koome said there was no evidence of systemic ballot tampering, and that the postponement would have affected all candidates equally.

She also said the technology used by officials met the standards of "integrity, verifiability, security and transparency."

Koome said the court found little or no evidence for the various claims, describing some as "nothing more than hot air."

"This is a unanimous decision. The petitions are hereby dismissed, as a consequence we declare the first respondent [Ruto] as president-elect."

Kenya's Supreme Court is the highest in the country and is established "as the final arbiter and interpreter of the constitution." It's the third time the court has been called upon to adjudicate an election dispute since its creation under Kenya's 2010 constitution.

"The truth of the matter is that political players ought to know that it's not for the Supreme Court to decide for them. They should go and work in such a way that they win without the need for us to invoke the Supreme Court," Kenyan political analyst Martin Oloo told DW, adding that people's expectations of the Supreme Court may have been watered down..

The most immediately apparent discrepancy, which drew much attention on results day, actually had an entirely innocent explanation in arithmetic. The candidates' respective shares of the vote were given to two decimal places by the election commission, and because of a rounding error that came about simplifying these figures, the total count appeared to stand at 100.01% of the votes cast.

The result had been keenly awaited in the Kenyan media, with newspaper front pages carrying headlines that included "Judgment day" and "Moment of Truth."

Odinga, who has previously claimed that was cheated in polls in 2007, 2013 and 2017, has sought to sell his legal battle as a fight "for democracy and good governance."

Meanwhile, Ruto had urged the court to reject the petition and accused Odinga of trying "to have another bite at the cherry through a judicially-forced re-run."

Both the Ruto and Odinga camps have promised that they will respect the decision of the court.

Incumbent President Uhuru Kenyatta, who is constitutionally barred from seeking a third five-year term, has publicly criticized his deputy Ruto and given his endorsement to Odinga.

Ruto leads the center to center-right Kenya Kwanza (Kenya First) Alliance and was minister for agriculture before becoming deputy president.

Odinga stood for president under the banner of the politically broad-ranging Azimio La Umoja (Declaration of Unity) Alliance, which includes Kenyatta's Jubilee party.

Kenyatta's Kikuyu ethnic group is the nation's most populous and it has has produced three of four presidents since independence from Britain in 1963.

However, there was no Kikuyu candidate this time around. In recognition of the importance of ethnic blocs when it comes to voting, both frontrunners chose a Kikuyu running mate to be vice president.

Kenya: Ruto will 'engage' any challenge to his election victory