Police from the German city of Hagen have struck a chord in calling on parents to respect their children's digital privacy. The post has reached millions and has sparked a debate. 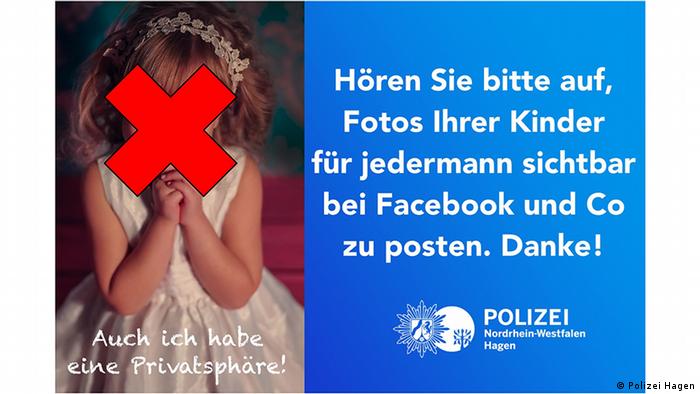 "Please stop posting photos of your children on Facebook and Co. for everybody to see," reads the Hagen police's graphic, next to a photo of a young girl whose face is obscured by a bold red X. "I have a private space too!" she is captioned as saying.

Created for the northwestern German city of nearly 200,000 inhabitants, this October 13 post has been shared by just as many Facebook users to date.

A representative of the Hagen police involved with its social media said in an interview with the regional "Rheinische Post" newspaper that he was excited that so many people had heard their message. He and his colleagues had grown concerned as they started seeing "every private situation posted."

"That was spinning in my head for weeks" before creating the advisory, he said.

The 'Internet forgets nothing'

The Hagen police warned not only of pedophilia, but also of the embarrassment the photos may cause the children in the future. If the photos turn up in a couple of years, "your child could even be bullied with them," the police warned. "The Internet forgets nothing."

Such photos have proliferated as proud parenting meets the digital age. A number of initiatives have since sprung up, urging parents to think twice before posting that photo of their child's bath time or first steps.

Most comments on the post agree with the message. "As adults you must protect your children…your voice is theirs!" one reads.

But not everyone sees the danger. Another commenter noted that bullying existed long before Facebook, while such excessive security concerns have not. "What should we do then," she wondered, "bundle the little ones in cotton and hide them in the closet so no one can see them?"

On Tuesday, the European Court of Justice will release a much-anticipated judgment on whether private European data stored on servers in the US are secure. The deciding factor is where the data are stored and processed. (05.10.2015)