Kazakh President Nazarbayev plans to give certain powers to parliament

Kazakh President Nursultan Nazarbayev announced during a televised speech that he would give some of his powers to parliament. This is seen as a move towards eventual political transition. 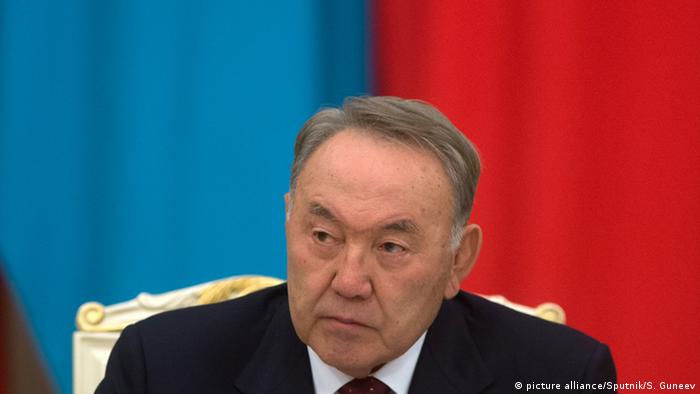 Kazakh President Nursultan Nazarbayev, who has led the ex-Soviet nation since 1989, has said he will give more power to the parliament.

In a televised speech Wednesday, Nazarbayev said the parliament would choose the cabinet, currently Nazarbayev's role according to the central Asian nation's current constitution. This would in turn give the cabinet more of an opportunity to manage Kazakhstan's economy.

Nazarbayev said that the president would focus on strategic matters, foreign policy and national security while serving as "supreme arbiter" between the various branches of government.

"The point of the proposed reform is in a serious redistribution of powers and democratization of the political system as a whole," said Nazarbayev during Wednesday's address.

Kazakhstan is the only nation from the former Soviet Union that is still run by its communist-era leader. Nazarbayev became the country's last communist leader in 1989 and then its first president in 1991 - an office he has held ever since. Nazarbayev won a fifth term in 2015 with a supposed 98 percent of the vote.

His suggestion to revise the constitution follows the death of Uzbekistan President Islam Karimov in September. Karimov had also been in power since 1989. Nazarbayev, 76, has not yet hinted at who he would like to succeed him.

The draft reform package will be published on Thursday, according to Nazarbayev's office. There is scheduled to be a month-long "nationwide discussion" before the reform is handed to parliament.

Should the reforms occur, it could make it easier to manage a succession by splitting roles between different political members rather than allowing Nazarbayev's successor sole control. Under the current constitution, the speaker of the senate, Kasym-Zhomart Tokayev, would succeed Nazarbayev in the event of his death, pending elections.

Nazarbayev's Nur Otan party has considerable force in the legislature, controlling 84 of 98 seats in the lower house (Mazhilis). The opposition was not pleased with Nazarbayev's announcement.

"No doubt, this is the beginning of 'Operation Successor,'" said opposition politician Amirzhan Kosanov. "Groups within the elite will split power among themselves."

Kazakhstan exports oil and minerals, but falling oil prices and the country's interdependence on neighboring Russia has hurt the economy recently.

Nursultan Nazarbayev is set to feature on new banknotes to be issued following his decision to freely float the country's currency, with the result that denominations now fit the big importance of the autocratic ruler. (15.11.2016)