Amid a family feud over the running of the famous opera festival, Katharina Wagner's directorial debut at Bayreuth split the audience. Not everybody, it seems, enjoyed seeing Richard Wagner dancing in his underwear. 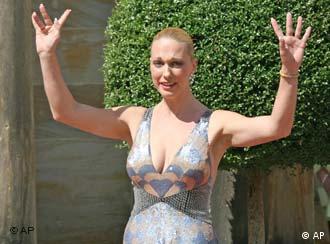 Germany's annual Bayreuth Festival of Wagner operas began on Wednesday with a highly anticipated, make-or-break production by the 29-year-old great-granddaughter of the composer Richard Wagner. 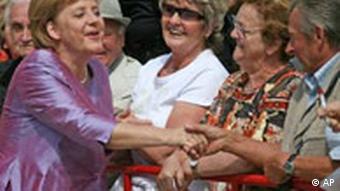 An opera buff who also happens to be close to the people: Angela Merkel

And while the applause after the first two acts of Wagner's only "comic" opera was friendly, the audience -- which included a smorgasbord of German political and social elite -- was less amused by the third and final act, which featured a few minutes of full frontal nudity, a bizarre sight of Richard Wagner dancing in his underwear and a bunch of master singers horsing around the stage with oversized penises.

When, at the end of the marathon seven-hour performance, which included 2 one-hour breaks, visibly nervous Katharina Wagner took to the stage, she was greeted with boos, hisses, jeers and whistles as well as bravos and cries of approval. The Bayreuth audience proved itself to be worthy of the music genre: dramatic, passionate and self-involved to the point of absurdity. 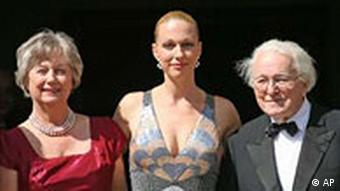 It's a family business: Katharina Wagner with father Wolfgang and mother Gudrun

Camera teams and hundreds of onlookers were outside the 19th century festival theater to see Katharina in a backless frock arrive to the opening with her father Wolfgang Wagner, the famous composer's 87-year-old grandson.

Katharina Wagner, who hopes to be appointed festival director in succession to her father Wolfgang, who's been in charge of the festival since 1951, told reporters that last-minute rehearsals were needed because of "technical problems." 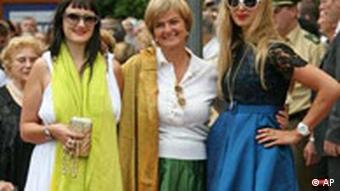 In an interview published on Wednesday, Wagner said new ideas were vital to keep the festival young at heart.

She told the German daily Süddeutsche Zeitung that the festival had to claw back from the opera houses its avant-garde role in Wagner interpretation.

"My concern is not to just preserve but to develop something new as well," she said.

"Bayreuth can dare to experiment," she said, pointing to past engagements of two of the shock directors of German theater, the late Heiner Müller in 1993 for "Tristan and Isolde" and Christoph Schlingensief in 2004 for "Parsifal."

Katharina Wagner -- the youngest-ever director and the first woman ever to have been entrusted with staging an opera at the festival established by her great-grandfather 131 years ago -- is, whether she likes to admit it or not, in the midst of an ongoing family feud.

A scene from the opera

In what seems like a cross-over between a soap-opera and a royal-family intrigue, the Wagners have been fighting over who will take over the festival management business for years. The Bayreuth board can hire anyone to run the public-funded festival, but the job is unique among German public appointments in always having been held by the Wagner family.

After failing to establish his second wife Gudrun as his successor, Wolfgang Wagner has put all his weight behind daughter Katharina. But Katharina's rival cousins Eva Wagner-Pasquier and Nike Wagner, both 62, also lay claim to the Bayreuth throne. Eva is Wolfgang's daughter by his first marriage, while Nike is the daughter of Wolfgang's brother Wieland, who died in 1966.

In the absence of a real royal family, the Wagners are a God-given gift to those Germans who like to combine their interests in high culture with society gossip.

In a production that -- perhaps to the shock of the hard-core, ultra-conservative Wagnerites -- did not feature a medieval town square and a cast that could be easily convinced to perform a dark, Dogma-style, version of Snow White and the Seven Dwarfs -- Katharina Wagner decided to put her foot down in Bayreuth as a modernizer par excellence. 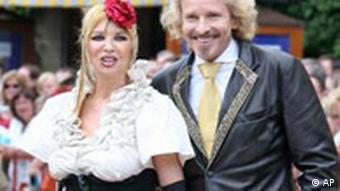 Bayreuth is the place to be seen: TV showman Thomas Gottschalk with his wife Thea

So she had sneakers raining from the sky. Even more importantly, however, while treating the opera as a kind of discourse on tradition and progress in art, she showed no particular respect for the actual plot.

In Wagner's original, Walther von Stolzing, a young knight, falls in love with the daughter of a rich Nuremberg burgher and tries to win her heart by entering a singing contest -- a medieval precursor to American Idol and German Superstar. At first he is rejected by the master singers -- the Simon Cowels and Paula Abduls of his time -- for breaking all of their traditional rules. Eventually, however, his natural talent wins them over. In essence, it's a boy-gets-girl-by-showing-he-can-sing kind of story.

In Katharina Wagner's staging, the hero is actually a wimp: a rebel who -- in order to win the contest -- becomes a conformist and emulator of his masters. In modern speak: a hard-rocker, who in the American Idol final, decides to sing a Whitney Houston ballad. 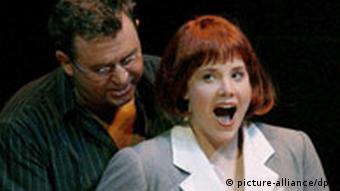 The reviews are yet to come in

Audience reactions to the unconventional production and critical response it receives could be decisive for Wagner, either spoiling or boosting her ambitions.

Achim Barth, from Frankfurt, dismissed the production as unnecessarily gimmicky.

"It's runs completely contrary to the text," Barth said. "It's just nonsense. Modern for the sake of being modern."

Leading German daily newspapers were not due to publish reviews till Friday but other media were quicker. A reviewer for the Web site of the weekly magazine Der Spiegel, for instance, compared the "overly intellectual" staging to a pizza: too many ingredients on a very thin base.

Wagner said she did not feel under any time pressure, since the post of festival director replacing her father, 87, had not yet been advertised.

This year, the festival, which runs until Aug. 28, will also feature "The Ring of the Nibelung," "Tannhäuser" and re-runs of Schlingensief's "Parsifal." All 54,000 available tickets to the 30 performances have been sold out.

Organizers received 460,500 applications and preferred applicants, who had been applying for eight years or more.

The costumes are fitted, the scenery paint has dried, and this year's five-week Bayreuth Festival is set to begin on Wednesday. DW spoke with four of the singers who are preparing to take the stage. (25.07.2007)

Who will be the next to take the throne at the world-famous Wagner Festival in Bayreuth, which starts Wedensday? DW spoke with the most likely candidate, Richard Wagner's great-granddaughter Katharina. (24.07.2007)

DW-RADIO reports from the Bayreuth festival