Radical imam Metin Kaplan's lawyer said her client is in Cologne, but the fact that he evaded arrest on the day of his conviction is still a huge embarrassment for German authorities. 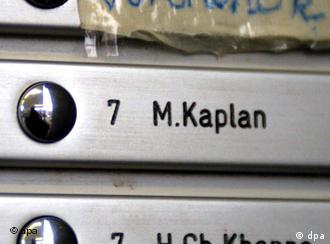 Kaplan is reportedly not far from home

Kaplan's lawyer, Ingeborg Naumann, told the German news agency DPA on Friday that the radical Muslim cleric is still in Cologne. She said he will fulfill all that is legally required of him and register with local police early next week.

The Europe-wide manhunt for Kaplan was called off late Thursday evening. This took some of the pressure off police, who showed up at his Cologne apartment on Wednesday only to find that Kaplan had disappeared.

But it hasn't stopped the finger-pointing about who is to blame for the botched arrest attempt, or speculation about what damaging effects the incident is having on Germany's image abroad.

Klaus Jansen, the head of the German detective's association (BDK) described the situation as a "major fiasco," while the head of the police union, Wolfgang Speck, said the mishap proved that politicians still weren't taking terrorism seriously enough.

A spokeswoman for the Green party said the timing was a disaster for German authorities. Just as Germany is discussing tougher security laws in connection with a new immigration law, the authorities appear to be incapable of seeing through a deportation order, Silke Stokar of the Green's parliamentary faction told the Berliner Zeitung.

The Social Democrat's parliamentarian from Cologne, Lale Akgün, agreed that the Kaplan case has undermined the authority of German officials. "Under such circumstances, people will find it difficult to believe that we're capable of passing good security laws," Akgün said.

The opposition has also been quick to criticize. "I'm surprised by the naïvety of the authorities," Wolfgang Bosbach, the Christian Democrat's spokesman on domestic affairs told the newsmagazine Spiegel. "Whoever seriously thought that Kaplan would simply show up with his bags packed following the deportation ruling must have been very naïve indeed."

Among those taking the most heat for Kaplan's disappearance is the interior minister for the state of North Rhine-Westphalia, Fritz Behrens. He said the incident was indeed "awkward," but has refused to accept blame, saying that police had acted within the full scope of their rights.

Kaplan has been under surveillance in Germany for years, and is required to report to German authorities on a regular basis, although he enjoys freedom of movement within the city of Cologne.

On Wednesday, a regional court in Münster found the radical Islamist guilty of inciting hatred, and issued an order to have him deported back to Turkey, where he is wanted on charges of high treason.

A spokesperson for the Federal Office for the Protection of the Constitution said he couldn't rule out that Kaplan fled before Wednesday's ruling was handed down during a period when he wasn't being watched. "We also have our limits," the spokesman said, adding that the Kaplan's apartment building with its many exits and underground parking garage couldn't be completely safeguarded.

BDK president Klaus Jansen didn't let the constitutional authorities off the hook that easily. "When you're staking out a foxhole, you have to keep all exits under observation -- that includes the underground parking garage," said Klaus Jansen. "If need be, you sit outside the door to the apartment."

A German court Wednesday ruled Metin Kaplan, the leader of an Islamic fundamentalist group, could be deported to his native Turkey. But lawyers for the so-called "Caliph of Cologne" said they will appeal the decision. (May 26, 2004)

German editorials on Friday commented on the disappearance of Islamic extremist Metin Kaplan after a court ruled he could be extradicted to Turkey. (May 28, 2004)

Islamist in Germany Given Two-Month Reprieve from Deportation

An Islamist leader threatened with deportation went missing after an arrest warrant was issued for him on Wednesday. But a court has ruled he can appeal the extradition ruling. A Europe-wide manhunt has been called off. (May 27, 2004)