Juno's first Jupiter snapshot: the start of something new

It took spacecraft Juno five years to get to Jupiter. Now, it's closer to the planet than ever before and has finally sent the first photo. It could be better. But NASA has promised that this is only the beginning. 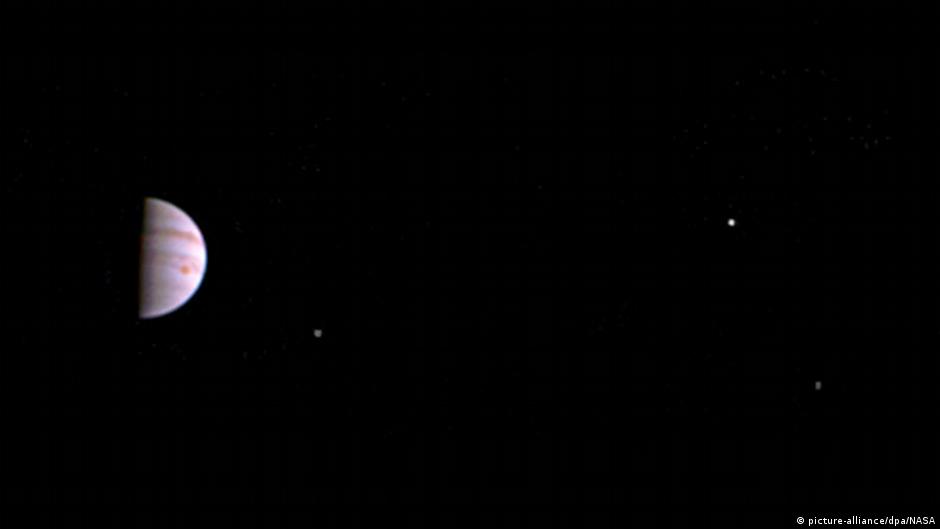 Less than a week after reaching Jupiter, NASA spacecraft Juno has sent its first pictures to Earth. The US space agency announced late Tuesday night that they had received the picture on Sunday, after the spacecraft's camera had been restarted.

The photo shows Jupiter surrounded by three of its four largest moons. The Great Red Spot (GRS) is also visible. The GRS is an atmospheric storm that has been roaring for more than 100 years but is still firmly located between two bands of clouds at around 22 degrees south latitude.

Granted, the photo isn't exactly what you'd call high-resolution, but it's still a sign for great things to come, according to NASA.

"This scene from JunoCam indicates it survived its first pass through Jupiter's extreme radiation environment without any degradation and is ready to take on Jupiter," said Scott Bolton, principal investigator from the Southwest Research Institute in San Antonio.

NASA also says that Juno will deliver higher quality photos toward the end of August, when the spacecraft will be very close to Jupiter.

Juno reached our solar system's biggest planet last week. The unmanned, mostly solar-powered spacecraft's journey took five years. Juno weighs around 3,500 kilograms (7,716 pounds) and is as big as a basketball court. It's supposed to circle Jupiter until 2018 and study it to learn more about the planet's origins, structure, atmosphere and magnetosphere.