Critical journalists have reacted harshly to Turkey's media blackout on the investigation of the bomb attack that killed 99 people in Ankara. Now legal experts have said the decision has no legal basis. 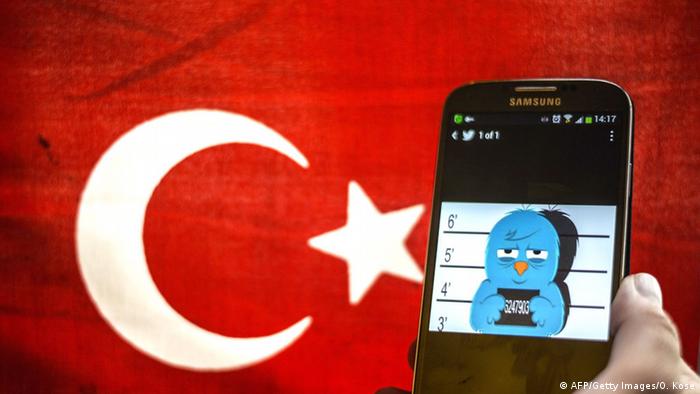 Following decision from an Ankara court on Wednesday, a blackout has been imposed on "all news, reports, criticism, and similar publications in print, visual, social media and the internet pertaining to the investigation" of the bombing.

The decision came after Prime Minister Ahmet Davutoglu announced that the identities of the two suicide bombers responsible for the Ankara attack were in the process of being established. After news of the blackout reached media outlets, it soon became the issue of the day on Twitter, which was reported to be running poorly in Turkey in the days following the attack.

After journalists began to react to the decision, a group of newspapers, including "Cumhuriyet," "Evrensel" and "BirGün," announced that the blackout would be "null and void for us."

Sources in the prosecutor's office have said that even if the media blackout was overturned in the event that those in contact with the suicide bombers were apprehended, the reporting ban is still an illegal restriction on freedom of the press, a position held by legal experts and journalist organizations alike.

"The decision is against the law, and a violation of rights, and those who have made the decision are in violation of the Constitution," said Turkish Criminal Lawyers' Association President Fikret Ilkiz.

"For this kind of a media blackout to be imposed, there must be an ongoing court case and the decision must be made by the court overseeing the case," Ilkiz added. "The Ankara court that made the decision to institute the blackout is in violation of the law and of the constitutionally guaranteed rights to obtain information and to be critical." 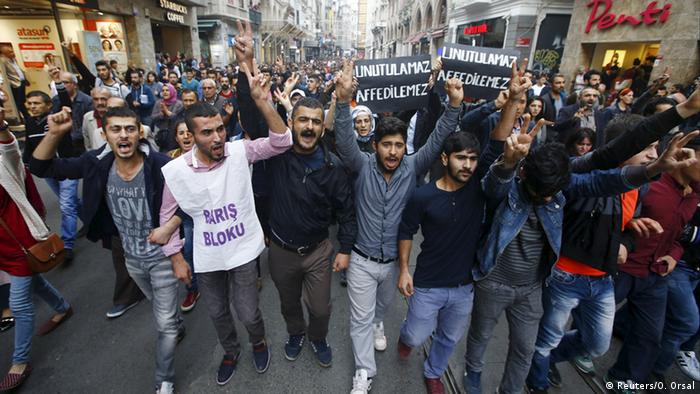 Protests in Istanbul after the suicide attack in Ankara

The Ankara court attributed its decision to statute relating to the press, though Ilkiz said the statute protects the right to commentary. "The decision completely lacks any legal basis," he said.

According to Ilkiz, individuals, media outlets and Internet news outlets have the right to object to the blackout.

"This is the latest in a series of judicial disasters implemented by the government," Ilkiz said. "These decisions are resulting in the eradication of the people's trust in the judiciary. This blackout must be overturned right away."

'The truth is being covered up'

The media blackout represents another huge blow to press freedom in Turkey and is completely unreasonable, according to Dogan Tilic, spokesman of the G-9 Platform, a forum founded by a consortium of major press organizations in Turkey.

"Media blackouts have become a reflex of the Justice and Development Party (AKP). Today everyone remembers that after the bombings in Reyhanli and Suruc, media blackouts were put into place," Tilic said. "Rather than following the suspects, the government is trying to cover up the truth. This ban not only harms press freedom but puts the investigation in doubt in the eyes of the public. The AKP government has spared no expenses while damaging democracy leading up to the general election."

The decision to impose a reporting blackout shows the Turkish government's disregard for freedom of the press, according to Modern Journalists Association President Ahmet Abakay.

"There is a dictatorial regime in Turkey and this media blackout is a practice of this regime," Abakay said. "Journalists will not shy away from reaching information just because the government wants to whitewash the truth. No matter how much pressure, the truth in Turkey will be revealed by the media. We are following this and are protesting this decision."

Despite the official bans, journalists will continue to seek the truth about who was behind the bombings, according to Erdem Gül, the Ankara representative of the "Cumhuriyet" daily.

"The AKP government imposes media blackouts upon events characterized by a chain of negligence and which need to be discussed because it doesn't want the media reporting on them," Gül told DW. "They tried to withhold events such as Suruç, Reyanlı, and [the Syrian-bound] National Intelligence Organization (MIT) trucks from the public. But real journalists will continue in pursuit of the truth."

Gül said the government is only interested in seeing its version of the story broadcast in the media. He pointed out that statements were made by Turkish President Recep Tayyip Erdogan and the prime minister claiming that they had found the organization responsible, that they were ready to reveal the attackers' identities and that "Islamic State" and the Kurdistan Workers Party (PKK) were linked to the attack.

"If there is a blackout, then they shouldn't talk either," Gül said. "If there is a media outlet that abides by the blackout, may they close their doors. The duty of a journalist is to find the truth and to not abide by bans,” Gül said.

Merkel's disputed visit to Turkey is a political minefield

German Chancellor Angela Merkel is set to visit Ankara for talks about the refugee crisis. Tensions are running high after attacks in the city and the country is in the midst of an election campaign. (15.10.2015)

'Where does Turkey go from here?'

With a fresh election in Turkey just weeks away, the country is more unstable than ever, as evidenced by the recent bomb attack. Middle East expert Michael Lüders told DW why he believes the vote won't bring peace. (14.10.2015)