The omission of Leroy Sané from Germany's World Cup squad raised eyebrows from Eppan to England. Despite the Manchester City star's breakthrough season, Joachim Löw has his reasons for leaving him at home. 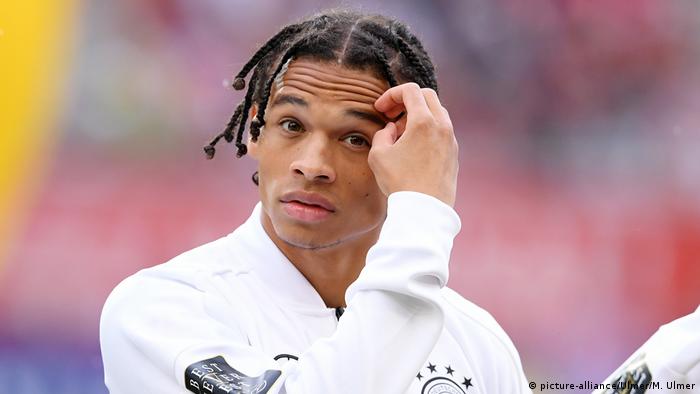 Breathing in sharply and sipping on his espresso, Joachim Löw was well aware of the impact of the fourth name to cross his lips.

The 22-year-old winger has just enjoyed the best season of his young career, scoring 10 goals and assisting 15 more as Manchester City brushed aside all before them in the English Premier League. He also picked up England's Professional Footballers Association (PFA) Young Player of the Year award while he was at it.

Sané's direct style of play saw him average almost three dribbles per game for the English champions last season, a quality which appeared to make him a sure bet to be part of a Germany squad which can lack penetration in one-on-one situations.

But despite playing such a key role for his club, Sané has so far flattered to deceive in his fledgling international career, managing to contribute just one assist in 12 appearances – in a 5-1 win over Azerbaijan in October 2017. 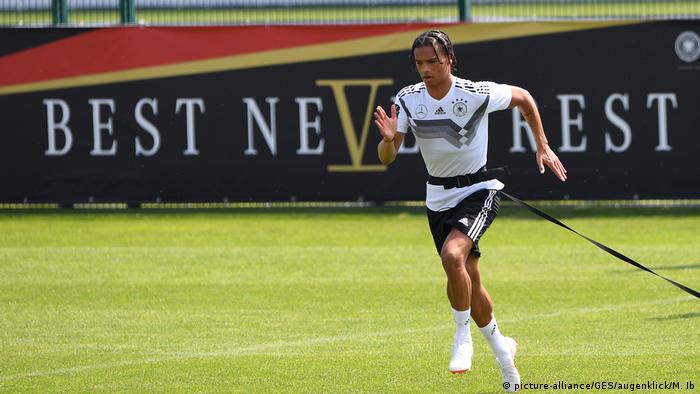 Held back: Manchester City's Leroy Sané was a surprising omission from the Germany squad

"Leroy has absolutely huge talent," explained Löw, saying that he will be back in the squad in September. "But he's not really arrived yet in his games for the national teams."

In all-important friendlies against England, Spain and Brazil in the build up to the World Cup, the Essen-born forward has failed to convince, despite substantial playing time. He was particularly disappointing in Germany's 2-1 defeat to neighbors Austria in Klagenfurt on Saturday, a performance which appears to have sealed his fate.

Although he was known to be unhappy that Sané pulled out of the Confederations Cup in order to have a nose operation last summer, Löw insisted that he has no problems with the youngster's attitude.

"There's absolutely no problem off the pitch," said the 58-year-old. "Leroy has conducted himself correctly and very professionally. But we had to make a decision because the squad has to be balanced." 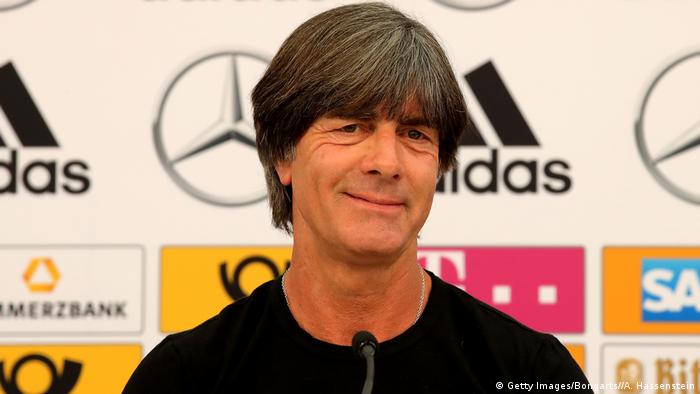 Difficult decisions: Joachim Löw insists on the importance of a balanced squad.

It would appear that this is what has worked against Sané, a victim of the unique dynamics within the Germany squad.

Although not orthodox wide players by trade, Borussia Dortmund's Reus and Bayern Munich's Thomas Müller can operate from the left and were never going to be omitted. In contrast to Sané, Draxler has shone for "Die Mannschaft," even if he's been less convincing for Paris Saint-Germain.

Meanwhile, Sané's main direct competitor, Brandt, who was praised by Löw for his performances at the Confed Cup, arguably offers a more rounded overall package – the importance of which Löw highlighted explicitly, drawing on his vast tournament experience since 2004.

Read more: Julian Brandt is not just exceptional when it comes to football.

"It's important that we are variable and flexible," he explained before naming the four omissions, adding another point which was also to Sané's disadvantage: "And it's equally important to have at least two options in every position."

If there's any position in which Germany are short on options, it's at left-back. Despite being the only second-division player in the squad, Cologne's Jonas Hector is a solid first-choice option, but Hertha Berlin's Marvin Plattenhardt is the only back-up option.

With Hector particularly likely to advance as an offensive wingback in a 3-5-2 formation, combined with Löw's insistence on doubling up in every position, there was no room left for the Manchester City man.

"Löw has put himself under huge pressure with this decision," raged former German international Michael Ballack on Twitter. "Leroy Sané, the best young player in the Premier League, has to stay at home? Not Jogi's best day!"

"Sané out" might look surprising at first glance, but Löw's decision could prove to be anything but "in-Sane."