In what proved to be one of Germany's most contentious litigations concerning the restitution of Jewish property, a family of German Jews has won a key ruling. 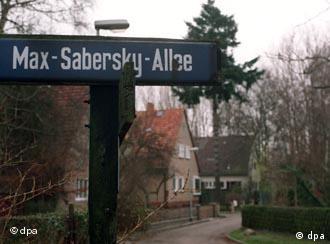 A street sign in memory of the former Jewish owners

The Federal Administrative Court in Leipzig ordered that authorities return a property near Berlin to the heirs of a Jewish family, on the grounds that it was sold under pressure from the Nazis 67 years ago.

Wolfgang Ewer, the lawyer for the Jewish association that brought the case before the courts, described the ruling as "a positive contribution to overcoming, in judicial terms, Germany's darkest chapter".

The landmark judgement comes a month after the Federal Administrative Court ruled that the Jewish Claims Conference could still win compensation for Jewish property seized by the Nazis despite the expiration of a December 31, 1992 deadline for claims by original Jewish owners and their heirs.

The ruling sets a new legal precedent and clears the way for some 705 further claims in connection with the Sabersky estate being heard simultaneously by a lower court in Potsdam. Legally, the properties can remain in the hands of the current owners if acquired "in good faith" after 1945, in which case the Sabersky heirs will receive compensation only. According to estimates, this is likely to be the case in some 150 of the 705 claims.

"People who have quite a good life today should not forget that their life is often paid for by the loss of property and the loss of life of Jews in the 1930s," Irene Runge, president of the Jewish Community Council in Berlin, told BBC. "It's a question of whether people have a feeling for history and whether they will accept that injustice was done between 1933 and 1945 to the Jews," Runge added.

The court overturned earlier rulings which had rejected a claim pertaining to the 200-acre estate in Teltow-Seehof, Brandenburg, brought on behalf of the descendants of Max and Albert Sabersky, who emigrated to the U.S. in 1938.

It said previous rulings had not considered the conditions under which the land was sold and the role played by the Nazi dictatorship in the sale.

In 1933, the Sabersky family had agreed with local authorities to divide the property they'd owned since 1870 into some 1,000 plots, which were then sold off over the next seven years.

The Sabersky heirs made a restitution claim in 1990, offering to sell the property back to the current owners at a reasonable price. Some 200 agreed, but the remaining 705 argued that there was no proof that the Saberskys had sold the estate under duress during the Third Reich and had in fact planned the sale prior to 1933.

This week, the Federal Administrative Court in Leipzig concluded there was no evidence of reasons for the sale other than pressure from the Nazi regime.

Wolfgang Ewer had argued that the Saberskys sold their land specifically because they felt their future in Germany was imperiled by the growing discrimination against Jews. The court accepted that Nazi persecution was partially responsible for the sale of the property.

"According to the law, there must be sufficient evidence showing that the legal transaction would have occurred even had the National Socialists not been in power", Judge Oswin Müller said, adding that "in this case, circumstantial evidence and inferences are not enough."

A list of more than 59,000 Jewish property owners from the former East Germany who are entitled to file for compensation payments over the next six months has been published.(Oct. 1, 2003)

The Jewish Claims Conference (JCC) can continue following up on expropriation claims involving property in the former East Germany (Oct. 23, 2003)