A Berlin court ruled on Thursday that Jehovah's Witnesses are entitled to the same privileges enjoyed by Germany's major Catholic and Protestant churches, ending a 15-year legal fight about the group's status. 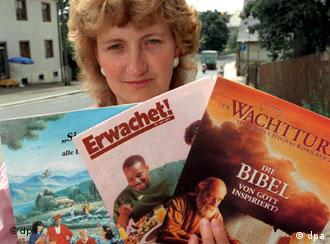 A Jehovah's Witness displays brochures of the group

The administrative court in the city-state of Berlin granted Jehovah's Witnesses the right to collect taxes and construct buildings after rejecting the arguments of lawyers that they were not a lawful group as they prevented children from receiving blood transfusions, endangered children's well-being through rigid educational practices, and damaged family relations.

But Berlin judges said the city-state authorities had been unable to substantiate the accusations with evidence from family courts or youth social workers. The court supported the position taken by lawyers for Jehovah's Witnesses that reports from people who had left that society were unreliable.

“If you have out of a hundred or two hundred thousand Jehovah’s Witnesses, 10 or 15 who say something like that, well you can go to any of the churches, the Catholic Church or others too, and ask was there anything you were discontented with?" said Richard Kelsey, an American who for years has been part of the Jehovah's Witnesses' leadership in Germany.

"I am very surprised that the court did not give more weight to the arguments put by the Berlin senate," he said. 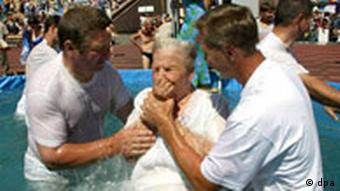 A new member of Jehovah's Witnesses is baptized in Ukraine in 2003 during a four day international congress.

Despite the favorable ruling, the church said it won’t fundamentally change its activities.

Under the Nazi regime, Jehovah’s Witnesses were sent to concentration camps. They were also banned by East Germany's Communists.

Jehovah's Witnesses assume a position of complete political neutrality, will not join the armed forces, and refuse even to salute a flag, considering their only allegiance to be to God.

The Berlin ruling has wider national implications as this is the first time Jehovah's Witnesses, whose German headquarters are in Berlin, have fought for recognition in the country. The group may now seek a similar status in Germany's 15 other states. There are around 166,000 Jehovah's Witnesses in Germany today.

Germany's integration commissioner wants imams who come to the country from abroad to have a knowledge of German and German society. It's one part of a 20-point strategy for fighting extremism and promoting integration. (Nov. 24, 2004)

Germans can lower their taxes by leaving their church. Now a Christian Democratic politician has proposed incentives for church tax payers, in the hopes that people will stop leaving in droves. (April 13, 2004)