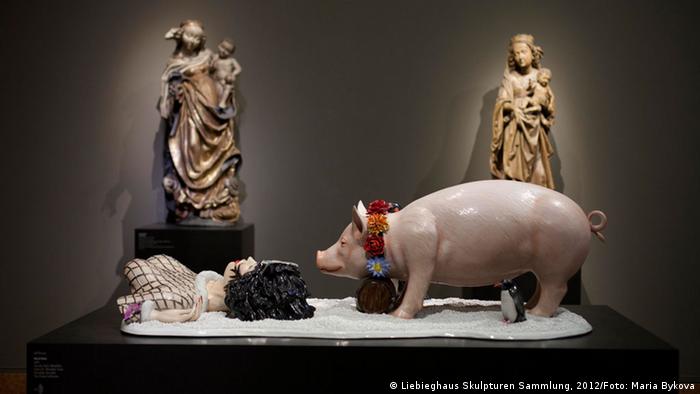 A Paris court of appeals has found pop artist Jeff Koons guilty of copyright infringement. Koons' 1988 Fait d'hiver sculpture copies a photo for a French clothing manufacturer's ad campaign, and Koons is to pay damages to the advertising designer for the unauthorized imitation, according to the court.

The accusation is not new, and shouldn't come as a surprise even to Koons. It is not the superstar's first conviction for copyright infringement. He regularly has to defend himself against accusations of plagiarism — and just as regularly, he loses the lawsuits. It is however safe to assume that Koons can afford the best lawyers, being one of the world's best-known contemporary artists as well as the most expensive. 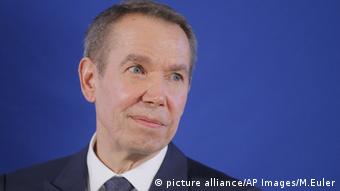 Koons' Rabbit sculpture was sold for a record $91.1 million (at the time, that was about €81 million) at an auction in New York in 2019, allowing him to reclaim the title of the world's most expensive living artist at auction from Britain's David Hockney, who had in 2018 surpassed Koons with the sale of Portrait of an Artist (Pool with two figures) for $90.3 million.

Copying is an art

One could wonder, why does a distinguished artist plagiarize?

Basically, copying IS Koons' art. The pop art movement was subversive from the very start, and unlike the art that went before, which was seen as elitist, pop artists worked with everyday objects. Kitsch and assembly line products are as much a part of the repertoire as are films, photographs and advertising.

The question should therefore rather be: Why is such art actually reviled as plagiarism?

In the Fait d'hivercase, Franck Davidovici designed an advertising photograph for the French clothing manufacturer, Naf Naf back in 1985. It shows a woman dressed in a thick coat, lying on her back in the snow with her eyes wide open; a pig with a barrel of schnapps around its neck sniffs at her head, recalling the legend of St. Bernard search dogs that supposedly carried schnapps to warm up avalanche victims. 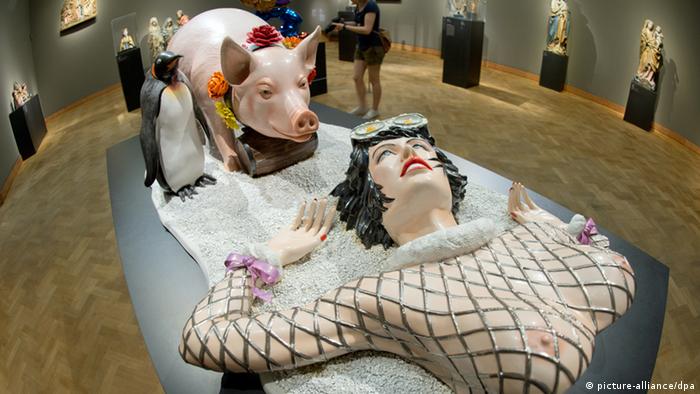 Not to be shown or reproduced, court rules: Fait d'Hiver

The advertising campaign featuring pigs taking on the roles of other animals was a huge success for Naf Naf in the 1990s.

Pop art icon Jeff Koons adapted the black-and-white photo motif of the woman and the pig for a colorful sculpture, except the woman in his sculpture is wearing a mesh top, the pig has a lascivious expression and he added penguins.

In court, Koons argued that he is an artist who appropriates existing motifs, which means that copying and modifying works is his artistic concept.

That calls into question a traditional understanding of art, namely that it should be an expression of originality. What makes a person an artist? How do we perceive art compared to other objects? And why do some works fetch such high prices?

The court ruled however that despite certain differences, the similarities prevail. It fined Jeff Koons and the Centre Pompidou, which had exhibited the sculpture in a retrospective in 2014, to the tune of €190,000 — much more than the €50,000 the court had demanded in a 2018 decision. The court also said Fait d'hiver may no longer be exhibited or reproduced.

"The works were compared on a purely external basis," said Eva-Maria Bauer, a researcher at the Center for Applied Legal Studies in Karlsruhe. However, the significant differences that also exist on a purely external basis were not taken into account, she told DW, expressing surprise at the ruling. Bauer wrote her doctoral thesis on copyright issues in the appropriation of images. The basic rule in copyright law is: Ideas are free, forms can be protected by copyright.

From a legal point of view, whether it is a photograph or a sculpture matters, as do the colors and whether elements were added — all true in the case of Koons' Fait d'hiver.

The real problem, however, lies elsewhere, she said. "For an art form that is characterized by the fact that it aims to analyze art and perception processes, I really don't think it makes sense to define it on the basis of external differences," Bauer argued. 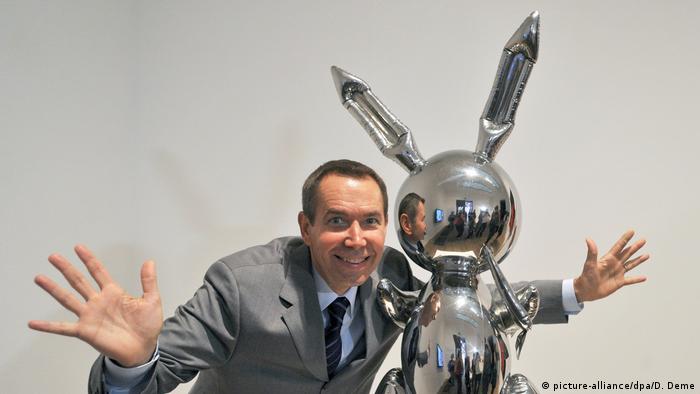 The question is not only relevant for artists. "The adoption of images has almost become a means of communication today," argues Bauer, adding that people initially find these processes in art, but today almost everyone uses them in memes and gifs. If you create a meme, you appropriate and alter visual material that also exists under copyright law. Laws and everyday practices are contradictory in this respect, Bauer concludes.

Not every meme is automatically art. But copyright law must look more closely at how to deal with the appropriation of images. In terms of art, this means the legal system would have to abandon outdated notions of art to find a more suitable manner to handle art movements like pop art.

Several artists and public officials have rejected American artist Jeff Koons' offer to give Paris a sculpture in honor of the victims of the 2015 terror attacks. They decried the proposed gift as "cynical."

When an art dealer spent $15,000 (€12,350) on a bundle of unseen art held in a New Jersey storage locker, he never expected to find potential multi-million dollar works by the likes of abstract master Willem de Kooning.

Raising awareness for the issue of child abduction, the ballerina has been planted in one of New York's busiest plazas. The American artist said he hopes the work represents a "sense of hope and optimism for the future."