Jason Day finally got his hands on a major title, clinching the US PGA title with a total unprecedented in major championship history. Jordan Spieth came second, but clinched a title of his own. 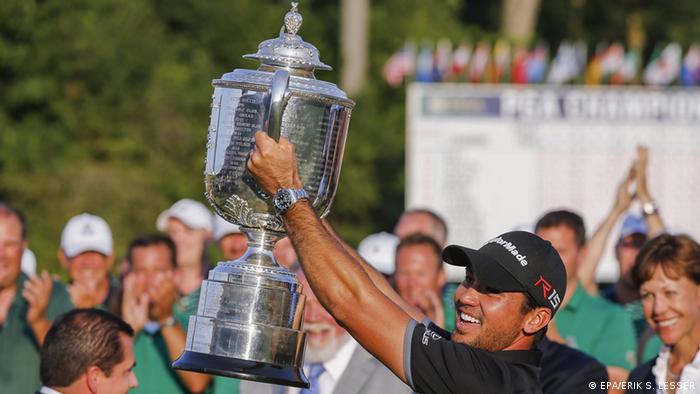 Jason Day has won his first major title, capturing the US PGA title in stunning style at Whistling Straits.

The 27-year old Australian played a five-under-par round of 67 on Sunday to clinch a 20-under par total - breaking Tiger Woods' record low winning total at a major, of 19-under par at the British Open in 2000.

"I didn't expect I was going to cry," Day said. "A lot of emotion has come out because I've been so close so many times and fallen short. To be able to play the way I did today, especially with Jordan in my group, I could tell that he was the favorite."

"Just to be able to finish the way I did was amazing," Day continued.

It was the third time that Day had held the lead in a major through three rounds of play, but the first in which he held on for victory. Day now moves from fifth to third in the world rankings.

The runner-up, Jordan Spieth, was unable to clinch his third major of an incredible 2015, but the 22-year old did claim a new title of his own: the world number one - overtaking Rory McIlory

"This is as easy a loss as I've ever had because felt that I not only couldn't do much about it, as the round went on, I also accomplished one of my life-long goals in the sport of golf," Spieth said.

"That will never be taken away from me now. I'll always be a number one player in the world," added the American.

Despite the outcome on Sunday, Spieth has produced a remarkable 2015 campaign, capturing the Masters and US Open and missing a playoff by one stroke at the British Open to finish equal fourth before his runner-up effort at Whistling Straits.

German number one Martin Kaymer finished tied-12th, with a ten-under par total, having recorded his only over-par total of the tournament on the final day.

Having already overstretched the championship by a day, the final round of the British Open would go even further than its scheduled time once again on Monday. Three men were left standing at the end. (20.07.2015)

Spieth follows up Masters title with victory at US Open

Jordan Spieth has won the US Open, taking his second major of the season. The young Texan emerged victorious after a fellow American blew the chance to seal the win on the final hole. (22.06.2015)

"One of the epic performances in the annals of our sport," were the words that resounded after Jordan Spieth holed his final putt at the 2015 Masters. The 21-year-old tied the scoring record at Augusta. (13.04.2015)