Japanese researchers say they have taken a significant step toward the creation of genetically modified super plants. One simple genetic manipulation, claims the RIKEN team, can make plants bigger and tougher. 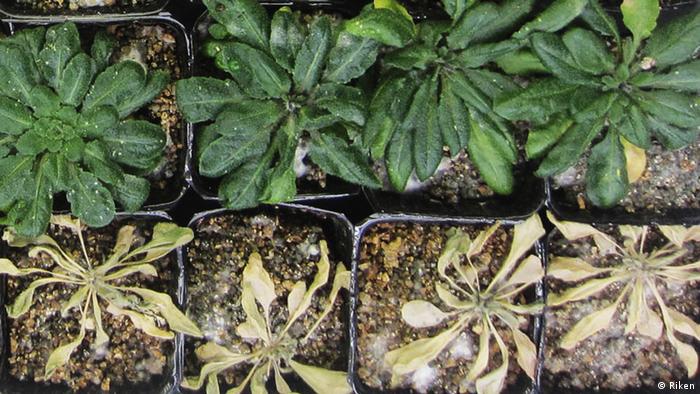 The two rows in the picture above show the identical plant, arabidopsis, grown under identical conditions. The top row, however, was modified genetically to alter the plant's biological clock, increasing its biomass and resilience significantly.

The results, published by Oxford in the journal Plant & Cell Physiology, dazzled the team of researchers at Japan's RIKEN applied science institute, who said they had made a giant step towards the creation of genetic super plants.

"This was a proof-of-concept study, and I'm satisfied because the data were very beautiful and clearly demonstrate that this approach works," said Norihito Nakamichi, who co-led the work with his colleague Hitoshi Sakakibara at the RIKEN Center for Sustainable Resource Science.

All about the clock

The team had conducted earlier experiments that suggested a molecular mechanism was controlling the biological, or circadian, clock of arabidopsis plants. In those trials, the scientists inhibited specific genes known as pseudo-response regulator (PRR) genes, which resulted in less significant changes to the size and resilience of the plant. When three of the genes were repressed, however, the team observed later flowering (resulting in larger size) and greater adaptability due to noticeable changes to the plant's circadian clock.

This time around, Nakamichi and Hitoshi engineered a modified PRR gene known as PRR5-VP that single-handedly brought about the changes seen in the first experiments involving PRR genes.

The team at RIKEN said the implementation of PRR5-VP genes on arabidopsis were only the beginning, citing other avenues for further research.

"In other plants, [these genes] might regulate physiological processes not found in the model species [arabidopsis]," Nakamichi said. "This approach may reveal aspects of the evolution of the biological clock's genetic network."

Genetically modified organisms (GMO), like maize, tomato and wheat, are highly disputed with regard to food safety. However, recent research shows that genetic exchange among species occurs naturally: in sweet potatoes. (22.04.2015)

Britain has given the green light to scientists to modify the genes of human embryos for research. Critics say it raises ethical questions over the future of "designer babies." (01.02.2016)