Japanese Prime Minister Shinzo Abe has ordered the decommissioning of the intact No. 5 and No. 6 reactors at the Fukushima Daiichi nuclear plant. His decision follows groundwater contamination from damaged reactors. 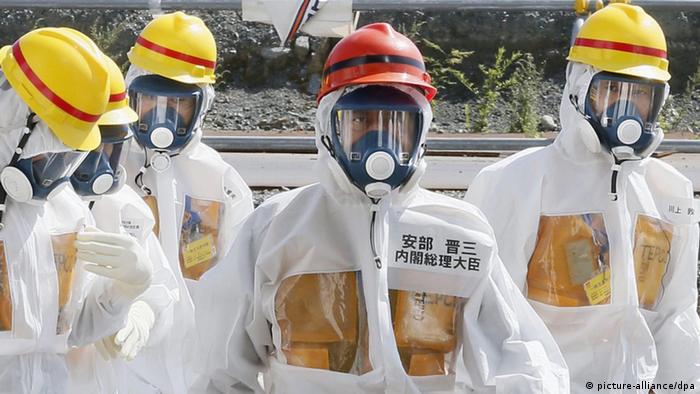 Prime Minister Abe ordered the Tokyo Electric Power Company (TEPCO) to scrap Fukushima's remaining reactors on Thursday, just over two weeks after his government pledged to take the lead in cleaning up the nuclear plant devastated by a tsunami in 2011.

Abe's order to decommission No. 5 and No. 6 came as he visited the plant to inspect the on-going problem of radiation leaks, according to the Kyodo news agency.

TEPCO had already decided to scrap its damaged reactors one through four. The plant has a total of six reactors.

Radiated water, used to cool the damaged reactors, has been leaking into local groundwater. The Japanese government intervened to take over the cleanup operations, after declaring TEPCO unable to stop the leakages on its own.

Some 300 tons of mildly contaminated groundwater is running into the ocean every day, according to the company.

Separately, TEPCO said that it had dumped 1,130 tons of water contaminated with low levels of radiation into the ocean after Typhoon Man-yi hit Japan last Monday.

"Once finding it was mostly rain water, they released it from the enclosure, because there is a limit on how much we can store," a TEPCO official said.

Tokyo has pledged $473 million (349 million euros) to end the leaks. The government plans to freeze the ground beneath the plant, effectively sealing off radiated reactor water from the surrounding environment. Its plan entails the laying of pipes in the ground, through which special refrigerant would be circulated, thereby freezing the soil.

Prime Minister Abe addressed the International Olympic Committee (IOC) in Buenos Aires earlier in September, where he sought to reassure officials that Fukushima's problems would not impact on the 2020 Olympics in Tokyo.

"Some may have concerns about Fukushima," Abe said. "Let me assure you, the situation is under control. It has never done and will never do any damage to Tokyo."