Japanese Prime Minister Shinzo Abe has visited a controversial war memorial. China has criticized the move as a mistake and potentially harmful to Japan-Asia relations. 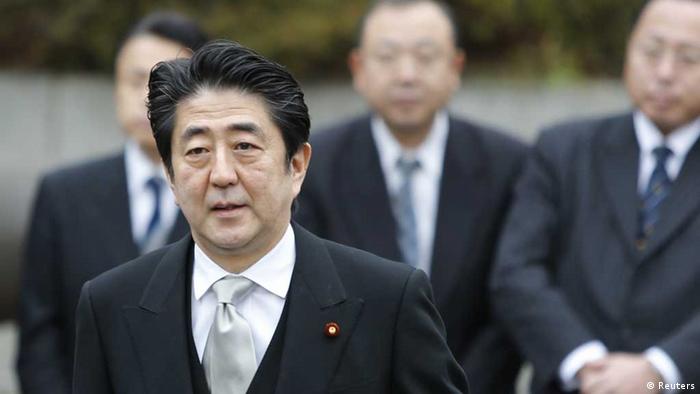 Prime Minister Abe paid his respects to the country's 2.5 million war dead at the Yasukuni shrine on Thursday. While most of the names enshrined at the memorial were common soldiers, the list also includes several high-level officials who were executed by an Allied tribunal for war crimes.

The visit coincided with the first anniversary of his taking office.

"It's been one year since I took office and I chose this day to come here and report to the spirits about the progress over the past year," Abe told reporters.

He added that the visit was also an act of renewing his "commitment to peace so that we will never cause anyone to suffer in war."

Abe's decision to honor the fallen on Thursday also appeared to serve as a reminder of his campaign promises of amending the country's constitution to allow it to have a standing army and rearm itself.

But he insisted his actions were peaceful.

"I am aware that, because of misunderstandings, some people criticize a visit to Yasukuni shrine as an act of worshipping war criminals, but I made my visit to pledge to create an era where people will never suffer from catastrophe in war," he said.

Deep scars remain in China and South Korea from Japan's brutal militarism during WWII, which led to the death of millions of civilians.

"Unfortunately, a Yasukuni visit has largely turned into a political and diplomatic issue," Abe said, adding, "I have no intention to neglect the feelings of the people in China and South Korea."

China issued a response to Abe's visit on Thursday expressing its concern at the symbolism of the move.

"We solemnly urge Japan to abide by its commitment to reflect on its history of aggression, take measures to correct its error, eliminate the adverse effects and take concrete actions to win the trust of its Asian neighbours and the international community," Chinese Foreign Ministry spokesman Qin Gang said in a statement.

Relations between Beijing and Tokyo have been strained in recent months due to a territorial dispute over islands in the East China Sea which both countries claim.

More than 160 Japanese lawmakers have visited the Yasukuni Shrine in Tokyo, which commemorates the country's war dead, including convicted war criminals. The shrine visit has raised tensions with China and South Korea. (23.04.2013)