Japan angers Korea by marking Takeshima Day | Asia| An in-depth look at news from across the continent | DW | 22.02.2013

Despite firm warnings from South Korea over the past week, the Japanese government has gone ahead with its plan to send a senior official to events in Shimane Prefecture to mark Takeshima Day. 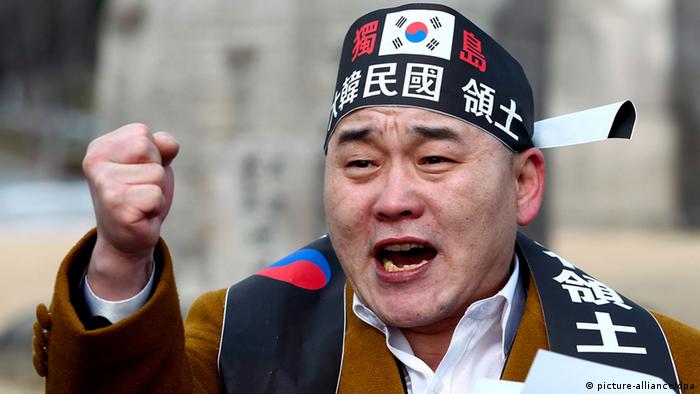 Alongside two dozen or so politicians, Aiko Shimajiri, a parliamentary secretary for the Cabinet Office, became the first high-ranking government representative to attend Takeshima Day, an event named after two rocky islets that both Japan and South Korea lay claim to, which has been staged since 2006.

The event in Shimane Prefecture, which is the closest part of mainland Japan to the disputed islands, threatens to further damage relations between two nations that have a rocky past and a frequently fractious present.

Prefectural Governor Zembee Mizoguchi was expected to deliver a petition demanding a solution to the territorial dispute later on Friday. Prime Minister Shinzo Abe did not take part in the event as he was in Washington DC, for talks with US President Barack Obama.

It was not entirely clear whether he would have attended, although in the run-up to his overwhelming victory in December's general election, he did state that he intended to pay a visit to Yasukuni Shrine in Tokyo on a day in August when victims of the war are remembered. The shrine is controversial because it is also considered to be the last resting place of a number of war criminals convicted and executed by the Allies after World War II. 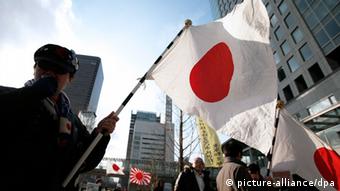 Many Japanese support their government's claim to the islands

In Seoul, citizens' groups staged protest rallies against the event in front of the Japanese Embassy. Television footage showed dozens of schoolchildren unfurling a banner bearing the slogan "We condemn Japan's Takeshima Day event." Another message read: "Japan should immediately retract its claim to Dokdo."

Demonstrations were expected throughout the day in other parts of South Korea, where generations of children have been taught about Japan's annexation and brutal occupation of the peninsula in the early decades of the last century.

Cho Tai-young, a spokesman for the South Korean foreign ministry, said in a statement on Thursday that relations between the two nations would inevitably be damaged if the Japanese government went ahead and sent a senior official to the event.

"As I have repeatedly said, Japan is going against history," Cho told local reporters. "

"The event and these actions fly in the face of the friendship between Korea and Japan."

He added that Seoul reserved the right to respond with "appropriate measures" after the Takeshima Day ceremony, although he declined to elaborate on the steps that the government might take. 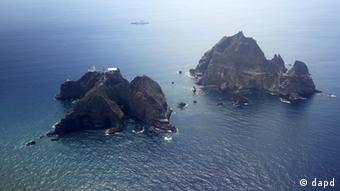 The islands may be small, but they generate some very strong feelings

According to the Korean version of the history of the islands, after the 1910 occupation of the peninsula, Shimane Prefecture then claimed the islands to be part of its territory and that remained unchanged until Imperial Japan's defeat in World War II in 1945.

The details of the San Francisco Peace Treaty now become important in the dispute. Korea says that early drafts of the agreement named Dokdo among the thousands of islands and parcels of territory that were to be returned to their historic owners across Asia, but by the sixth draft all the place names had become so cumbersome that for the sake of convenience only three major Korean islands were identified by name.

If the islands were returned to their historic owners, says Seoul, then the islands are clearly Korean. Supporting Korea's claims are ancient descriptions of the islands being part of the Silla Dynasty in AD 512 as well as maps and documents - Korean, Japanese and those made by Western explorers - amassed by the Seoul-based Northeast Asian History Foundation.

Of all the paperwork, however, no document is perhaps more persuasive than the map produced by Japan's Department of the Interior in 1877 and now housed in the National Archives of Tokyo. A framed copy is held by the foundation and shows that in a reply to letter from the department to Japan's Great Council of State in March of that year, the council made clear that Japan had no relationship with either Dokdo.

In Tokyo, the government has constantly brushed aside Korea's claims and insists that the islands are an inherent part of Japanese territory, based entirely on historical facts and international law. To further support its claim, Japan has proposed that the dispute be taken to the International Court of Justice and that both sides be given the chance to stake their claims to the islands, but Seoul has so far refused. 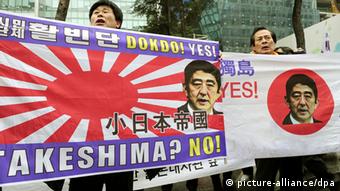 South Korean demonstrators in front of the Japanese Embassy in Seoul

Analysts in Japan said South Korea was over-reacting to this latest situation.

"I guess you could say that this is a provocative act, but let's be clear about this; sending an official to Shimane Prefecture in no way threatens South Korea's territorial integrity or sovereignty and Shimajiri is visiting a Japanese town," pointed out Go Ito, a professor of international relations at Tokyo's Meiji University.

"It looks to me as if South Korea is looking for small issues to protest about, and they are doing that more often and more loudly recently," he said.

But Professor Ito did agree that this year the timing of Takeshima Day - which falls on the day in 1905 on which the islands were officially incorporated into Japan - is unfortunate as it comes just three days before the inauguration of Park Guen-hye as South Korea's new president.

"We will have to watch the response of the incoming government in Seoul, but I would hope that Ms. Park will simply ignore this issue because there are much more important issues that we need to solve," he said.

What both sides broadly agree on is that the question of who owns these islands is unlikely to be resolved in the near future.

South Korean officials on Tuesday rejected a proposal by Japan that the International Court of Justice settle a dispute over a group of Pacific islets. The islands have been a source of conflict for hundreds of years. (21.08.2012)

Japan says it will take a territorial dispute with South Korea to the International Court of Justice. This comes a day after the South Korean president fueled tensions with a trip to the islands at the center of the row. (11.08.2012)