The first legal punishments for last year's Costa Concordia shipwreck disaster have been imposed. An Italian court has accepted plea bargain agreements for four crew members and a manager of the ship's operating company. 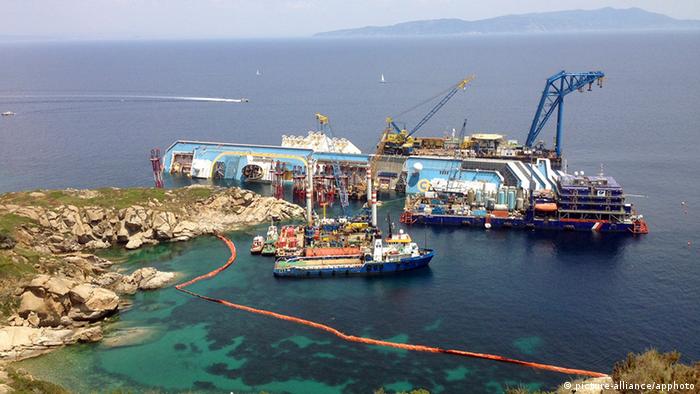 An Italian judge imposed jail sentences under plea bargains against five shipping company employees on Saturday for the Costa Concordia disaster in early 2012 that claimed 32 lives. They had been indicted for manslaughter and causing serious injury.

The longest sentence of 34 months was imposed on Roberto Ferrarini, the crisis coordinator of the Costa Crociere cruise company. He was accused of delaying rescue operations in a bid to minimize reputational damage for the firm.

The plea bargains accepted by the court in the Italian town of Grosseto allowed defendants to admit guilt in return for lower punishments, thereby avoiding public trial.

Cabin service manager Manrico Giampiedroni was given a 30-month term.

Judicial sources quoted by Reuters said none are likely to go to jail as the sentences under two years would be suspended, and the longer sentences could be subject to appeal or replaced with community service.

Saturday's decision leaves the ship's captain Francesco Schettino as the sole defendant in court proceedings that started earlier this week in Grosseto. He is accused of multiple manslaughter and abandoning ship. Schettino has denied the charges. If found guilty, he could face up to 20 years in prison.

The Grosseto court has set the next hearings in Schettino's trial for September 23 to 27. His lawyers have called 100 witnesses and plan to probe management practices at ship owner Costa Crociere as part of his complaint that he should not be standing trial alone.

The Concordia hit a reef off Italy's western Tuscany coast on January 13, 2012, and ran aground off the island of Giglio, after steering dangerously close to the coastline. On board had been 4,229 passengers from 70 countries.

It keeled sideways, sparking a panicked and delayed evacuation which saw some people forced to throw themselves into the freezing cold waters during what was wintertime in the Mediterannean region.

Audio from the ship's black box later revealed command chaos on the bridge on the night of the shipwreck. The bodies of two victims were never found.