‘Empower people to step forward and join the discussion '

With his show Jaafartalk, Jaafar Abdul Karim wants to provide a place where all types of people can express themselves freely. Here are three questions for Jaafar.  Go to article 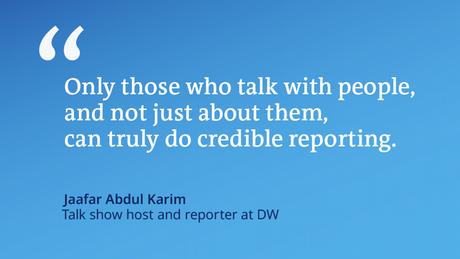 The TV shows hosted by Jaafar Abdul Karim are a highlight of DW's Arabic-language program. After presenting the award-winning youth format Shababtalk for eight years, he will start a new weekly show at the end of July.

Current online articles from and about Jaafar

CIVIS Media Prize 2020 - honours for 6 programmes, plus one TOP AWARD

Jaafar Abdul Karim is a journalist and the host of Jaafartalk at Deutsche Welle. He writes a trilingual column for Zeit Online, and has a video blog at Spiegel Online. He has reported extensively from conflict areas in the Middle East. His recent reporting focuses on the refugee crisis, among many others. Abdul Karim has reported from Bar-Elias refugee camp in Lebanon, refugee centers in Lesbos, Zaatari refugee camp in Jordan and from refugee reception centers in Germany, most notably from the crisis ridden Berlin State Office for Health and Social Affairs in Berlin (LAGESO)

He was named Germany's Reporter of the Year by Medium magazine in 2016. Born in Liberia and raised in Switzerland, Jaafar studied communications and computer science at TU Dresden and INSA Lyon. He has also completed a directing course at the London Film Academy. He holds a master's degree in communication and leadership from Quadriga University in Berlin.

More from Jaafar on dw.com

Olaf Scholz: 'It’s imperative that we return to the rule of law'

Stammtisch: After Chemnitz - Caught between the lines?

SPD's Martin Schulz: Angela Merkel has no vision for the future