They are Oriental meatballs, but there are over 200 different ways to prepare them. Lale Yanik and Arzu Bulut, at their restaurant, Osmans Töchter, make them the way they're made in the provincial capital of Izmir.

Before they opened the restaurant together in 2012, Arzu Bulut and Lale Yanik were only acquaintances. Now, they are friends. 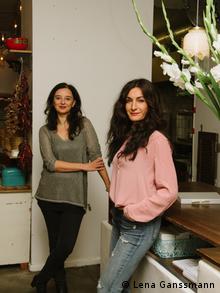 It couldn't be any other way - that becomes abundantly clear when you see how much heart and soul has flowed into this joint project. At Osmans Töchter in Berlin's Prenzlauer Berg district, Turkish housewives cook alongside professional chefs. The two restaurateurs can jump into the kitchen at any time - after all, they have both been cooking since they were children. It's simply part of the way parents raise their children in Turkey.

Oriental rugs adorn the walls, colorful pillows are everywhere, lamps made out of mason jars, and two charming hostesses – this is "Osman's Daughters" (Osmans Töchter). The menu at Osmans Töchter is full of Turkish classics interpreted in a sophisticated, modern way.

Osman's Daughters in the kitchen

Osman's Daughters in the kitchen

To make sauce, dice onions and garlic. Heat 3-4 T canola oil in a pan, briefly sauté onions, then add garlic and briefly sauté. Add bell pepper and tomato paste, and mix thoroughly.  Add canned tomatoes and oregano to pan, season with salt and pepper to taste, and simmer at medium heat for five to eight minutes.

In the meantime, peel potatoes and chop into quarters or sixths, depending on size. Peel carrots, slice once through the middle, and slice each half into three pieces. Wash spiral peppers, then dry, and slice in half. Peel and quarter tomatoes.

To make köfte, dice onions. Chop parsley and grate white bread. Place in a large bowl with other köfte ingredients and mix thoroughly. Form meat into long 5-7 cm pieces by hand. Continue to moisten hands to ensure that mixture does not stick.

Place köfte onto a deep cooking sheet or a deep clay pot. Arrange potato wedges and carrot pieces between köfte.

Distribute spiral peppers and peeled tomatoes over the köfte. Ladle tomato sauce over the tray or pot and add around 150-200 ml water at the edges of the tray. Then spoon 3-4 T canola oil over the tray. Preheat oven and bake for around 20 minutes at 220°C. Turn temperature down to 180°C and cook for an additional 40 minutes. At around half of the cooking time, stir carefully to distribute broth at bottom of tray.