The man who damaged a priceless painting of Ivan the Terrible in a Moscow museum should face the maximum possible sentence, Russian officials have said. He apparently grew "disturbed" by the canvas after a shot of vodka. 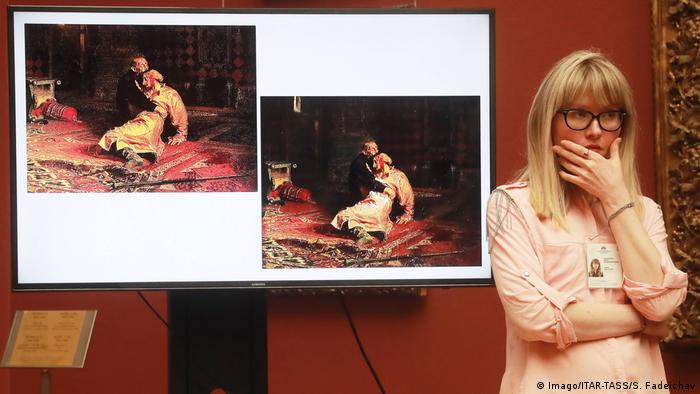 Moscow's Tretyakov Gallery has said it will review the sale of alcohol on its premises after an apparently drunken guest used a metal pole from a security barrier to smash the protective glass and damage a 1885 masterpiece by Russian painter Ilya Repin.

Tretyakov curator Tatyana Gorodkova has described the act of vandalism as a "tragedy."

"The incident was awful and frightening and speaks to the aggression which reigns in society," she said Monday.

She also said the museum was considering hiring psychologists to help pick out potentially dangerous visitors. 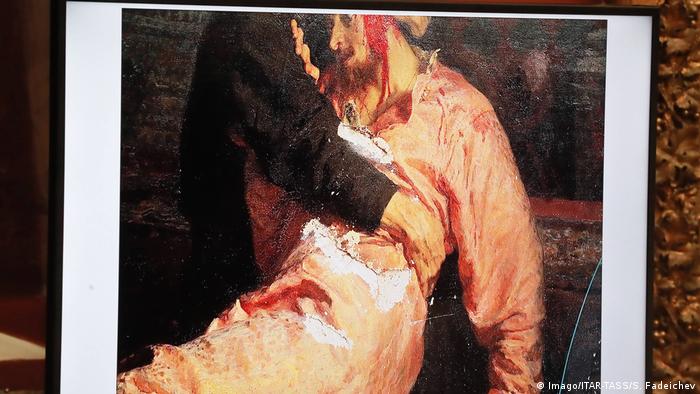 The attack left three large marks on the painting's surface

Repin's canvas, one of the country's most famous paintings and described by its curators as being in the same league as the Mona Lisa, depicts Russia's 16th century ruler, Ivan the Terrible, cradling his dead son in the moments after the tsar, according to some historical accounts, killed the prince in a fit of rage.

According to Gorodkova, the content of the picture likely played a role in the Friday night attack. While smashing the glass, the 37-year-old visitor apparently shouted something about how Ivan the Terrible did not kill his son. Several historians believe the prince died of illness instead, and the viewpoint is popular among Russian nationalists.

Gorodkova said the attack showed how Russians are increasingly "not differentiating artistic work from historical facts."

'Disturbed' by the picture

Russian police arrested the man shortly after the Friday attack. Authorities said the man grew "disturbed" by the painting after drinking vodka in the on-site cafe. The Interior Ministry also published a video recording of the perpetrator giving a statement.

"I came to see it, about eight in the evening I went to the cafe, I was already about to leave, and I drank 100 gram [some 3.5 ounces] of vodka," the man said in the video. "I don't [usually] drink vodka, and something just snapped."

The suspect remains in detention.

Addressing reporters alongside Gorodkova on Monday, Russia's Deputy Culture Minister Vladimir Aristarkhov said the offender should be made an example of to deter future vandalism.

"The Ministry of Culture is urging the harshest, most severe punishment for the man who damaged the picture," Aristarkhov said.

Under the current law, the offender could face up to three years in prison, but several officials have said the parliament might raise this limit for similar cases in the future.

"Three years is nothing compared to the value of this painting," Aristarkhov added.

Friday's attack is not the first time the picture has been defaced. In 1913, a man stabbed the painting with knife. Although Repin was still alive at the time and able to help with the restoration effort, the gallery's curator ended up committing suicide over the attack.