Newly planted palm trees in the shadow of the Milan Cathedral were set alight shortly after nationalist protests. The controversy has spread to Twitter, where a storm of criticism has erupted. 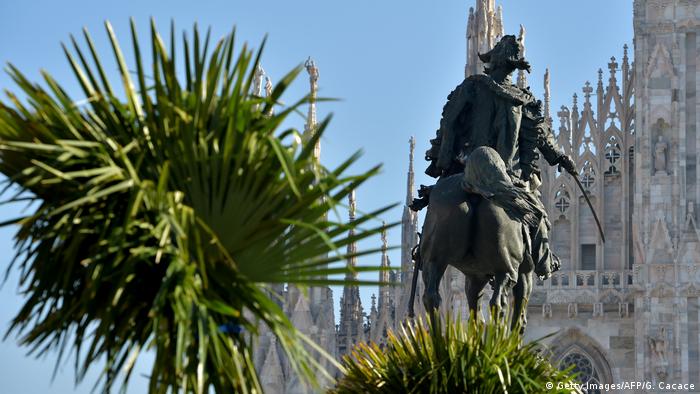 Italy's right-wing nationalists' opposition to foreigners is no longer limited to people but now also extends to trees.

CasaPound tweeted that the trees made a mockery of Italian culture.

Protesters waved Italian flags in front of a large banner alleging the "Africanisation" of the historic plaza.

Twitter is awash with palm-inspired memes, including pink palms in front of an aquamarine-colored Duomo subtitled, Milano Vice, a reference to the popular 1980s television series in the US.

A well-known landscape architect wrote a front page criticism in the daily "La Repubblica" dismissing the tree-planting project as "neo-gothic folly" that veers "to the limits of kitsch."

The Northern League chief came under fire after writing on Twitter that the scene was only missing "sand, camels and illegal migrants who will feel at home," while one of his supporters suggested that to accompany the desert scene, the cathedral's famed spires would next be covered with minarets.

The palm trees, some of them five meters (17 feet) tall, appeared Thursday in front of the 14th-century Gothic cathedral.

Critics complained that it wasn't only that  the new plants - including banana trees - were non-native, but also that they were sponsored by Starbucks. The city-organized the project, which is part of a public-private initiative to periodically update the city's green spaces.

The US coffee giant agreed to sponsor this project as it prepares to establish itself among Italy's cherished network of mostly independent coffee bars and cafes.

Palm trees aren't native to Italy, but are now commonplace throughout the country, including in Rome, the Riviera and, yes, even Milan.

The palms were championed by fascist dictator Benito Mussolini as symbols of Italy's short-lived African empire. The new arrivals in Milan are a cold-resistant variety, which were expected to survive the northern Italian city's chilly winters. 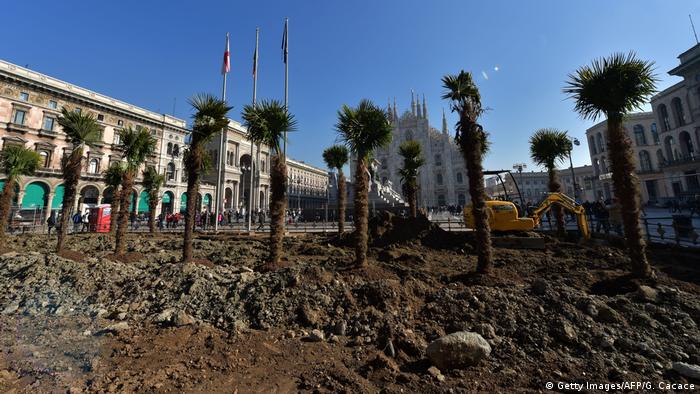 Architect Marco Bay, who won an open competition to landscape the spaces, said he isn't completely surprised by the controversy "because it is difficult in Milan to see something new."

He dismissed criticism that palm trees don't belong in the city, noting that there are already hundreds of them. Indeed, some palms in Italy are older than the country itself, having been brought to the peninsula by novelty-seeking aristocrats as far back as the 18th century.

"The idea was born by looking at the space," Bay said, adding that the trees recalled both the columns of the porticoes skirting the piazza and the spires of the Duomo. "I wanted plants that create architecture, but also scenery."

Not everyone is critical of the new look. Bar owner Mario Governa, opposite the palms, said sales are up more than 25 percent as people flock to see what the fuss is all about.

Milan, he said, "correctly wanted to do something aggressive" to liven up its otherwise innocuous flowerbeds.