Italy Recovers from Worst Blackout in a Decade | Europe| News and current affairs from around the continent | DW | 28.09.2003

Italy Recovers from Worst Blackout in a Decade

Most of Italy lost power Sunday morning in the latest European blackout, leaving thousands stranded and city streets dark. By late afternoon, power had been restored across most of the country. 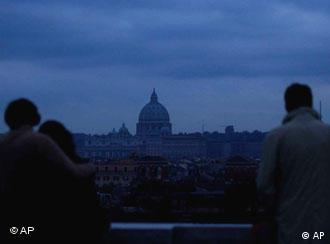 The Italian capital -- normally a sea of lights -- plunged into darkness early Sunday morning, as a five-hour blackout struck most of Italy.

More than a million people were out celebrating Rome's first "White Night" party, an all-night cultural extravaganza with museums and restaurants due to stay open till dawn. The lights went out at around 3:30am, and the "White Night" became virtually pitch black.

The city's subway came to complete standstill, leaving hundreds of people stranded underground. But most of them took the blackout in stride.

"We don't know anything, power's gone off across Italy but we don't know why or how long we're going to have to sit here," one reveler told Deutsche Welle.

Those above ground were left to walk home or try their luck on one of the desperately overcrowded buses plying the city. Hospitals were able to continue operating thanks to emergency generators.

Other than in a few isolated pockets, power went out across the entire country, virtually at the same time in a blackout that lasted nearly five hours and affected most of Italy’s 57 million residents. As many as 30,000 people were stranded as electricity powered trains ground to a halt. In Southern Tyrol, one train even had to be pulled out of an alpine tunnel, and outages stopped train traffic between the heavily trafficked border sectors to Switzerland.

By Sunday afternoon, however, power was gradually being restored across the country.

Italian officials blamed the brownout on the breakdown of electricity lines coming in from France, Switzerland and Austria – all countries from which energy-hungry Italy imports power. One line coming in from Switzerland appeared to be knocked out after a tree fell on it, but officials said it was unlikely a single event could trigger the failure of Italy’s entire power grid. The incident highlights Italy's limited capacity for generating its own power.

As energy officials sought to find answers explaining Italy's worst blackout in a decade, police and other civic authorities sought to bring the country back under control. By mid-morning, they succeeded in doing so, according to Guido Bertolas, the head of Italy’s civil protection services.

The cuts hit the Italian mainland and the island of Sicily. There was, however, no disruption of supplies on the Island of Sardinia.

The latest in a chain of events

Sunday's blackout marks the latest in a series of major power cuts to hit Europe. Italy itself had some partial outages in June. On August 28, power failed in London, creating disasterous traffic and transportation chaos in the British capital. And on Sept. 23, the power grid failed in Denmark and Sweden following problems with electricity supply from a Swedish nuclear power plant.

Analysts say the incident in Italy is likely to revive debate over whether Italy should turn to nuclear power to help generate its energy needs. The authorities say power demand is growing faster than supply and even imported electricity is unlikely to be enough in the long-term.

Crippled infrastructure, darkened hospitals, stalled elevators– is the chaos in the U.S. possible in Germany? No, say experts, even in the event of power outages, the country would still function. (Aug. 16, 2003)