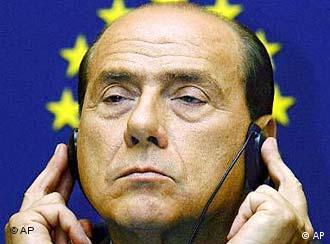 Hear no evil: Berlusconi is back in the firing line despite warnings

In a move that risked setting it on a collision course with Italian Prime Minister Silvio Berlusconi, the EU's executive arm noted that Italy's public deficit has exceeded the EU ceiling in both 2003 and 2004.

It said the excessive deficit, well beyond the limit of 3.0 percent of gross domestic product set out in the EU's Stability and Growth Pact which underpins the euro, could not be blamed on exceptional circumstances.

"The excess of the deficit over the reference value is not exceptional, as defined by the Pact ... nor is it the result of a severe economic downturn," conditions which may have won Rome a reprieve, the commission said in a report.

Italy is currently in a mild recession and its public deficit is the largest in the 12-nation euro zone. The Italian government has acknowledged that it will exceed the EU's ceiling again this year.

The commission said Italy's deficit "has been above the reference value for two years and, according to the Commission's spring forecast, it will be well above 3.0 percent in 2005 and 2006, even if economic growth returned to its potential rate."

The commission's excessive deficit action and recommendations will be examined by EU finance ministers at their next meeting on July 11 and 12. 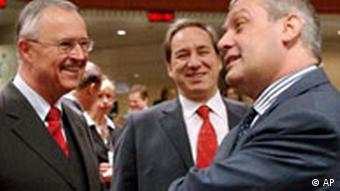 In Luxembourg, Italian Finance Minister Domenico Siniscalco (photo, left) immediately issued a call for reason and said he hoped that his EU partners would give Rome at least two years, until 2007, to bring the deficit back into line. "I am fighting for a reasonable solution," he said. "This is not an examination but an attempt between partners to find a solution that is in everybody's interest."

The move came as the Italian government has been multiplying its criticism of the EU, itself in a malaise after seeing its draft constitution rejected last week by two founding members, France and the Netherlands.

Berlusconi, under pressure and with little economic room to maneuver ahead of legislative elections next year, said last week that the EU needed to be reviewed, laws should be trimmed and red tape cut. 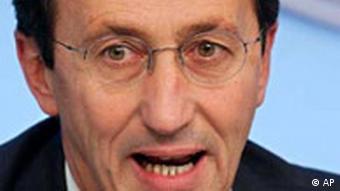 His deputy, and the country's foreign minister, Gianfranco Fini said Tuesday that Italy would be prepared to veto the controversial EU budget if its funds were reduced. Fini also warned of serious political divisions among the EU's 25 leaders when they meet at their summit in Brussels at the end of next week.

Two Italian government ministers, both from the far-right Northern League, have also sparked uproar by suggesting that Italy refloat its old lira currency in parallel with the euro.

The bloc agreed revisions to its budget pact in March, nearly 18 months after the rules were effectively suspended despite repeated violations of the 3.0 percent rule by EU heavyweights France and Germany.

Portugal next in line for EU action 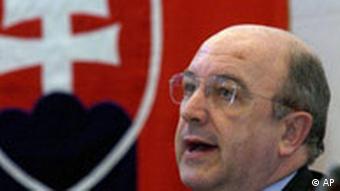 The European Union could also take disciplinary action against Portugal this month for allowing its public deficit to exceed the EU guidelines, economic and monetary

"We are going to release a similar report" to the one on Italy made public on Tuesday "on June 22 for Portugal," he told reporters at the European Parliament in Strasbourg.

The road into the euro zone for countries in eastern Europe has become smoother after the agreement by EU leaders last week to relax budget rules, ministers and analysts say. (March 28, 2005)

When France and Germany, chronic violators of EU budget requirements, pushed for a weakening of those rules, they hardly expected to attract IMF attention. (April 15, 2005)

In the wake of Sunday's decision to loosen the rules of the Stability and Growth pact which underpins the euro, opposition voices in Germany are crying foul. But some economists say more flexibility was needed. (March 21, 2005)