Italy Make Light Work of Ukraine to Meet Hosts in Semi-Finals | News and current affairs from Germany and around the world | DW | 30.06.2006

Despite surviving a few scares, Italy finally turned on the style and beat Ukraine in a 3-0 win and waltzed into the semi-finals of the World Cup and a date with hosts Germany in Dortmund on Tuesday. 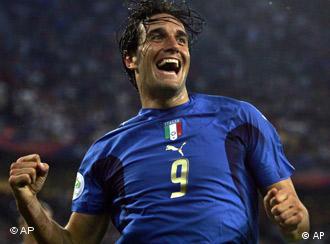 Luca Toni scored twice as Italy beat Ukraine 3-0 in the World Cup quarter-finals in Hamburg on Friday to set up a mouth-watering last four clash against hosts Germany.

Gianluca Zambrotta, who earlier this week flew back to Italy to visit his stricken former Juventus team-mate Gianluca Pessotto after an apparent suicide attempt, gave the three-time champions an early lead with a left-footed shot.

Toni's close range header near the hour mark put the Azzurri firmly in the driving seat after a spell of heavy Ukraine pressure, and the giant Fiorentina marksman doubled his tally by tapping in Zambrotta's cross.

Ukraine's Andriy Gusin's header hit the bar shortly after Toni had made it 2-0.

The match between Germany and Italy, which will be played in Dortmund on Tuesday, is a repeat of the 1982 final which the Italians won 3-1. 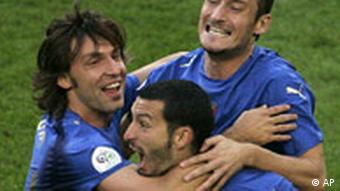 Midfielder Mauro Camoranesi, recalled to Italy's starting line-up to provide extra width on the right, threatened first, firing wide after a robust run through the middle in the fourth minute.

Italy went ahead through an unlikely source in the sixth minute.

Zambrotta played a one-two with Francesco Totti before firing a low drive past Oleksandr Shovkovskyi.

Ukraine came out fighting at the start of the second half and they might have levelled the score had it not been for Buffon's quick reflexes. 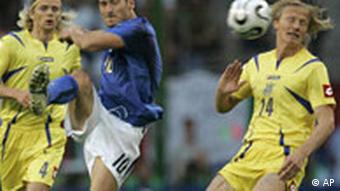 Francesco Totti was inspired against Ukraine

Gusin's downward header looked goal bound, but the Italy keeper managed to claw the ball away and picked up a bump on the head in the process after falling back onto the post.

Buffon came to Italy's rescue again when he palmed away Gusev's angled shot, and although Tymoschuk was first to the loose ball, Zambrotta was on hand to keep out the rebound.

Toni eased Italy's jangling nerves in the 59th minute, meeting Totti's left-wing cross with a meaty header. And Toni had the final word 10 minutes later when he nudged Zambrotta's cut-back over the line from a yard out.

The last time Italy reached the semi-finals of the World Cup was in 1994 when they went on to the final only to lose to Brazil on penalties.

Review all the action as it happened on DW-WORLD.DE's Live Ticker.

The 2002 World Cup was hailed as a move away from the traditional power bases of international soccer and a new dawn for Asian and African teams. The latter stages of the 2006 tournament, however, suggests differently. (June 28, 2006)

Italy face the striker who used to terrorize Serie A defenders on a weekly basis when they take on Ukraine in Hamburg in Friday's World Cup quarter-final. (June 30, 2006)