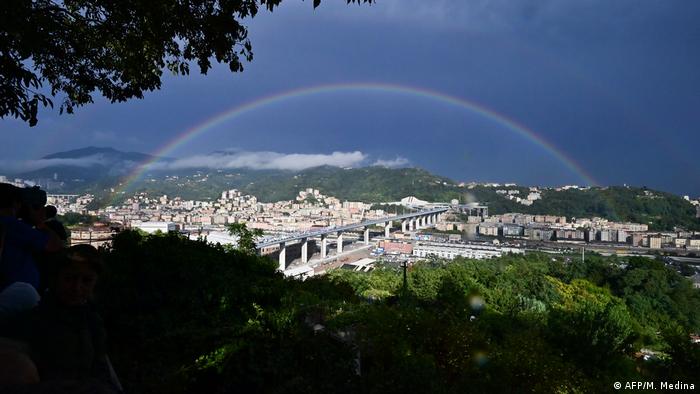 The Italian port city of Genoa inaugurated its new San-Giorgio motorway bridge on Monday, shortly before the two-year anniversary of the Morandi bridge collapse.

On August 14, 2018, the Morandi motorway bridge — named after the engineer who designed it — gave way during heavy rain. Dozens of cars and several trucks fell onto railway tracks below. A total of 43 people were killed in the disaster and hundreds more were injured.

Prime Minister Giuseppe Conte gave a speech and cut a ribbon before planes overhead displayed the Italian flag in smoke.

The incident — one of Italy's worst civil disasters in decades — shone a light on the country's poor infrastructure maintenance, as well as sparking an investigation into toll-road operator Autostrade that ran the bridge.

“If the old bridge was the worst of Italy’s infrastructure, this new bridge is thought to exhibit the best of it," DW's Charlotte Chelsom-Pill said, reporting from the scene.

Architect: 'A mixture of sorrow and pride'

The replacement bridge was designed by star architect and Genoa native Renzo Piano, who was also the architect for the Shard in London and the Centre Georges Pompidou in Paris.

"The new bridge is taking the place of the old one, so it's a mix of sorrow, of what's happening, but also pride," Piano told DW. "Not just by me, by the entire community, more than 1,000 people. There is the pride of being able to rebuild the bridge. This is suspended somewhere between the sorrow and pride," said Piano, who also spoke at the inauguration. 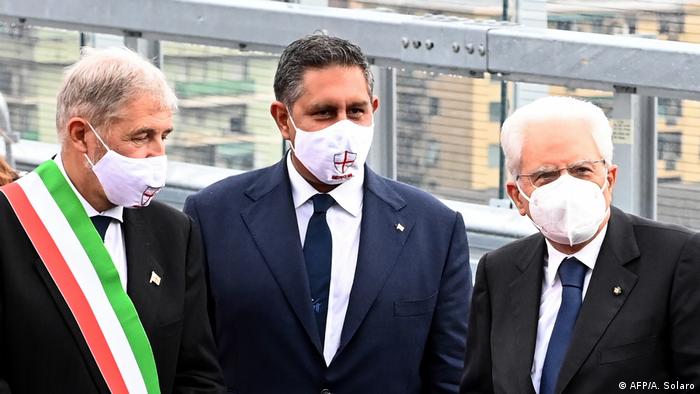 Italian President Sergio Mattarella was the first to cross the bridge

Prime Minister Conte said the new bridge will be a "symbol of a new Italy rising up again." Italian President Sergio Mattarella was the first to officially cross the bridge.

Families of the victims are not attending the ceremony. Instead, they are meeting 10 days later to mark the second anniversary of the tragedy.

The bridge is expected to open to traffic on Tuesday or Wednesday.

There were just 18 months between the demolition of the old bridge to the opening of the new bridge. Out of these, the bridge-erecting process lasted just 10 months — a point of pride for a country often criticized for its slow pace in carrying out public projects.

"There was no day off, we worked through Christmas and Easter too. It was madness but we were all set on this year being 'bridge year," said head construction worker Stefano Mosconi.

It was "an honor" to be part of the project, added Mosconi.

Despite the success of the project, the inauguration was a muted affair out of respect for the victims and their families.

"There's a feeling of both regret for what happened and pride in the work that's been done," mayor of Genoa and state-appointed commissioner for bridge reconstruction Marco Bucci told news agency Reuters. "We've worked and shown Italian excellence."

Mosconi said he and his colleagues were not planning on celebrating the bridge, fearful of causing misunderstandings: "Sure, we've built something good but first something terrible took place."

Autostrade, which runs almost half of Italy's motorway network, is currently under investigation for culpable homicide, following the bridge tragedy. Several Transport Ministry officials are also being investigated.

Atlantia, the parent group of Autostrade, bowed to pressure last month and relinquished control of its toll-road operator, which will be nationalized.