Italy clamps down on corruption to lure investment 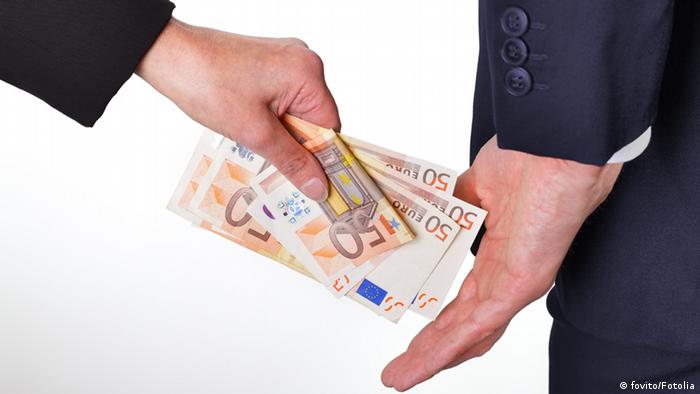 The law creates punishments for crimes in the private sector. Previous sanctions only covered corruption that leaked into the public sector.

"The first word that comes to mind at the news that the anti-corruption law has been passed is 'finally'," read a statement from Luciano Hinna, a member of Transparency International's Italian office.

Money laundering as an organized crime is increasingly becoming a problem in Germany, says a new report by the Federal Criminal Police Office (BKA). But fighting money launderers has proven to be difficult. (30.10.2012)

Italy's 69th-place finish out of 182 countries in the survey was the worst result among the European Union's 27 members, making some outsiders wary of investing their money. Corruption costs debt-laden Italy an estimated 60 billion euros ($78 billion) a year, according to the country's Court of Accounts.

Prime Minister Mario Monti had said that a serious corruption law would unblock Italy's growth. The reform guarantees anonymity to whistleblowers on corrupt deals and forces public bodies to publish details of their spending on the internet, in the name of transparency.

Prison sentences for those convicted of bribery are being toughened from a maximum of five years to up to eight. Corrupting the justice system now carries a maximum 10-year sentence, up from a maximum of eight years, and extortion up to 12 years.

The law was originally proposed in 2010, under the government of Monti's predecessor, Silvio Berlusconi. However, its approval was delayed by opposition from members of Berlusconi's People of Freedom party, who forced some changes. Monti then submitted the bill to a confidence vote.

'We can always do more'

Some argue that the bill does not go far enough. For example, it prevents investigators from using wiretapping in corruption cases, while application of a ban on running for public office for those convicted of stealing public funds was delayed.

"We can always do more," Justice Minister Paola Severino said, rejecting suggestions that the law is the fruit of a "watered-down political compromise."

Monti has also vowed to cut down the size of local government in order to reduce opportunities for graft. On Wednesday, his cabinet adopted a decree to trim the number of Italian provinces from 86 to 51 starting in 2014.