Thousands of Italian trade unionists have taken to the streets of Rome to protest against government austerity measures. This followed similar demonstrations in both Athens and Madrid earlier in the week. 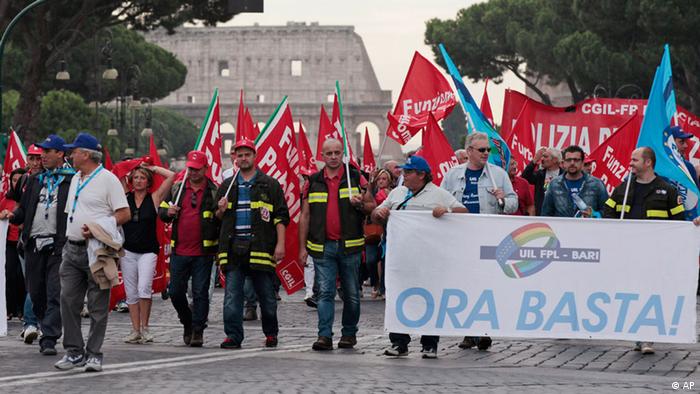 The march, in which mainly public sector workers took part, was organized by two of Italy's biggest trade unions, the CGIL and UIL.

The unions argue that Prime Minister Mario Monti's plans to cut spending by 26 billion euros ($34 billion) by 2014 is forcing public sector workers to bear an unfair burden. Around one in 10 civil servants is expected to lose his or her job as a result of the cuts unveiled last month.

"It's not true that by cutting the public administration they will reduce debt. They will make it worse," CGIL Secretary-General Susanna Camusso told the rally. "The policy they have followed so far has made things worse, not better."

The public services minister, though, called on the unions to focus their efforts on negotiations rather than holding demonstrations.

"I respect the position of those striking," Filippo Patroni Griffi said. "But I'd like to remind them that we're carrying out an important step at the moment, namely the reorganization of public services." He added that the cuts were part of an overall plan to make the civil service more efficient.

The demonstration forced the closure of two of Rome's most popular tourist destinations, the Roman Forum and the Colosseum.

Southern European counties that have been hardest hit by the eurozone's sovereign debt crisis have seen a series of demonstrations over the past few months. Similar protests led to clashes between demonstrators and police in both Athens and Madrid earlier in the week.

Organizers said around 30,000 people took part in Friday's demonstration in Rome. They have threatened to hold further protests in the next few weeks.