Italian Nuns Appeal to Save Comatose Woman | Europe | News and current affairs from around the continent | DW | 15.11.2008

Nuns in Italy under whose care a comatose woman has been surviving on life support for 14 years, have launched an appeal to save her life after a ruling by Italy's top appeals court allowing her family to halt treatment. 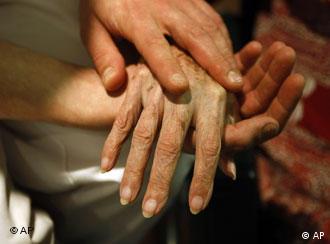 Euthenasia is not allowed in Italy

"Our hope, and that of many like us, is that the death by hunger and thirst of Eluana, and others in her condition, will not be carried out," the nuns of the Misericordine Order said in a letter published Saturday in the Catholic newspaper Avvenire.

The 35-year-old Eluana Englaro's case has fuelled controversy over euthanasia in mostly Catholic Italy where church authorities have spoken out against her elderly father Beppino's intention to terminate her life.

On Thursday, the Cassation court upheld a July ruling allowing for the removal of feeding tubes connected to Eluana, who has been in a coma for 16 years.

Eluana fell into a vegetative state after a 1992 car accident and has been staying at the Beato Luigi Talamoni clinic in the northern city of Lecco since 1994.

"If there are those who consider her dead, let Eluana remain with us who feel she is alive," the nuns said in their letter.

Case stirs politicians at every echelon

Meanwhile, Beppino Englaro's stated intention to have his daughter transferred to a public health facility where doctors can disconnect the feeding tubes, has triggered further controversy.

Roberto Formigoni, the president of the Lombardy region where Lecco is situated, has warned that doctors performing such a procedure would face disciplinary action be failing to honor commitments to the "well-being" of their patients.

The case has also resonated in parliament, pitting conservatives against those who say people should be allowed to choose what medical treatment they wish to receive and to specify this by means of "living wills."

Several members of Prime Minister Silvio Berlusconi's government have criticized the Cassation ruling, accusing magistrates of usurping parliament's authority. They have also questioned the competency of the court to rule Eluana's condition as "irreversible."

But others have pointed for the need to fill a void in legislation in Italy, where voluntarily terminating a life is forbidden, but where the constitution also grants patients the right to refuse medical treatment.

A top Italian court has allowed doctors to cut life support to a coma patient, though euthanasia isn't legal in the country. Meanwhile in Britain, a 13-year-old won the right to refuse a potentially life-saving surgery. (14.11.2008)