Palestinian children are working under exploitative conditions on Israeli settlements, ensuring handsome profits for the settlers. As Mel Frykberg reports from the West Bank, the children are too afraid to speak out. 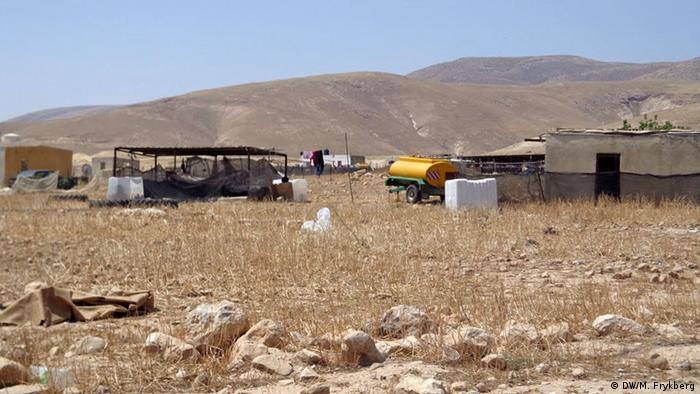 Tin shacks with inadequate water and electricity infrastructure make up the village of upper Fasayal in the Jordan Valley north of Jericho. Grinding poverty and unemployment has forced many children to leave school and to seek employment, often at the behest of their parents, on Israeli settlements. Unemployment in the Jordan Valley stands at 34 percent.

It is 2 p.m. and Muhammad Hashem*, 14, has walked several kilometers home in the blistering Jordan Valley heat after working a back-breaking seven hours, with only half an hour's break, in the agricultural fields of the Israeli settlement Tomer, north of Jericho.

He is too weary to stand as his picture is taken and there are dark bags under his eyes from exhaustion.

Muhammad is one of hundreds of Palestinian children who has dropped out of school and started working for low wages in exploitive conditions to ensure some Israeli agricultural settlements prosper, aided and abetted by Palestinian middlemen who are employed by the Israelis as managers of these agricultural fields. 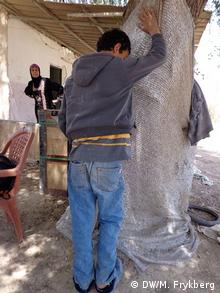 "Israeli settlement farms in the West Bank are using Palestinian child labor to grow, harvest, and pack agricultural produce, much of it for export, in violation of international standards," states the HRW report.

"Children as young as 11 work on some settlement farms, often in high temperatures. The children carry heavy loads, are exposed to hazardous pesticides, and in some cases have to pay themselves for medical treatment for work-related injuries or illness."

Muhammad explains what a day's labour on the settlement involves.

"My brother Amir and I have to get up at 5.30 a.m. We are picked up by a tractor and trailer at 6am and then driven to Tomer's agricultural fields by the Palestinian manager," Muhammad tells DW.

"We have to work through to 10 a.m. If we don't work fast enough picking and packaging sweet peppers, dates, tomatoes, egg plants, herbs and roses we are fired without being paid. At 10 a.m. we have half an hour's break but only if the manager is satisfied with our work otherwise we have to work through the break. The manager doesn't care if we are tired or sick because if he doesn't satisfy the Israeli owners he will lose his job too." 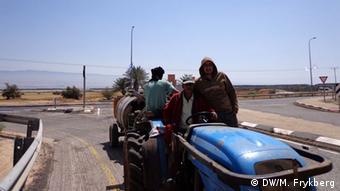 Palestinian teenagers on their way to Tomer settlement

Local headmaster Y.Z. tells DW, "the children are paid about $23 (21 euros) per day but they only receive about $15 after the middleman takes a cut for himself. If the Israelis employed Thai workers they'd have to pay a lot more."

The Palestinian middlemen/managers maximize their profits by under-reporting how many children are working for them so they can pay less insurance. The children are not paid overtime, sick leave or holiday pay.

This semester alone 15 children from upper Fasayal, with a population of 500, dropped out of school to go and work in the settlements.

"The parents are too scared to criticize the middlemen because their children will be kicked out and there are plenty of other children to take their place," says Y.Z.

A father of two sons employed in Tomer, who earns a small salary serving tea and coffee at a local school, explained his situation.

"I have 10 children and a wife and elderly mother to support. I would prefer my children to stay at school but we are struggling to survive what should I do?" Khaled Al Rasheb* tells DW.

Bill Van Esveld from HRW said there is a lot of resentment toward these Palestinian middlemen by Palestinian academics. 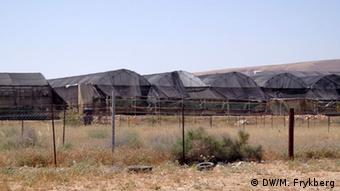 "A further problem is the Palestinian Authority (PA) being unable to prosecute the middlemen in areas where they have no jurisdiction such as the Jordan Valley," Van Esveld tells DW.

"They have prosecuted a number of these middlemen in the areas where they do have jurisdiction but they should be doing more."

David Elhayani, head of the Jordan Valley regional council of settlements, denied HRW's findings, claiming the alleged accounts were fraudulent. He told the Washington Post the council employs 6,000 Palestinians every day, but no minors.

The Israeli military which controls the West Bank obfuscates the issue by saying the Israeli Civil Administration doesn't issue work permits to Palestinian children to work in Israeli settlements. However, the agricultural fields are situated just outside the settlements they belong to so no work permit is needed by the children who work there.

Israel's Foreign Ministry said it was now investigating the matter. Israeli law forbids children under 15 from working, however some of the Palestinian children employed on the settlements' agricultural fields are 13 and 14.