The Israeli military has blamed Gaza authority Hamas for an attack on its soldiers by Palestinian "terrorists." Hamas has disputed the accusation and put the blame back on Israel. 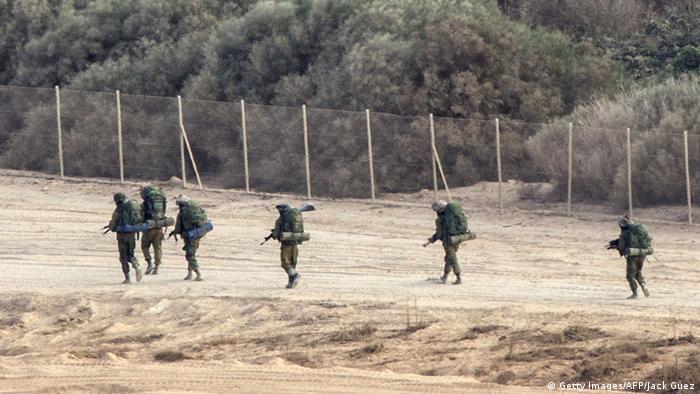 Israeli soldiers shot dead four Palestinians on Saturday on the border to the Gaza Strip after the heavily armed militants attempted to climb the border fence, the Israeli military said.

The military said on Twitter that the men were armed with assault rifles, anti-tank missiles and hand grenades.

Later, at a press conference, Israeli army spokesman Lt. Col. Jonathan Conricus told reporters that Israeli soldiers opened fire when the militants, dressed in uniforms, tried to climb the border fence. The militants returned fire before being killed, he added.

Conricus said that the "organization affiliation" of the four individuals remained unknown. However, he blamed the Islamist group Hamas, which controls Gaza, for being "responsible and accountable for any acts of violence emanating from the Gaza Strip whether they were Hamas operatives or not Hamas operatives."

Conricus said a larger attack had been prevented, without providing more details.

Hamas spokesperson Abdel-Latif al-Qanou said the attempt to scale the border fence was "an individual act" and was not planned by Hamas. He described the four individuals as "angry youths" reacting to Israel's 12-year blockade of Gaza.

"The [Israeli] occupation is responsible for the state of anger and pressure inflicted on our people due to the continued siege on Gaza," he said in a statement.

Israel and Hamas reached an informal ceasefire in May following the worst fighting since a 2014 war.

However, there has been a recent escalation in clashes between militants from Gaza and the Israeli army, which is keeping the enclave under a blockade that Israel says is prompted by security concerns.

Last week, three soldiers were injured after a Palestinian who was seeking to avenge his brother's death at the hands of Israeli forces entered Israel from Gaza and opened fire. The man was killed in the ensuing gunbattle.

Earlier this week, a 19-year-old Israeli soldier and student was stabbed to death in a settlement in the West Bank. The suspect in that attack is still at large.

The violence comes ahead of Israeli general elections on September 17, with Prime Minister Benjamin Netanyahu under pressure to show a firm hand in dealing with Palestinian militants.