Israel Says No Aggression Intended in German Ship Incident | Germany | News and in-depth reporting from Berlin and beyond | DW | 26.10.2006

Israel said Thursday that no aggression against German forces was intended during a confrontation between Israeli aircraft and a German naval vessel patrolling off Lebanon. 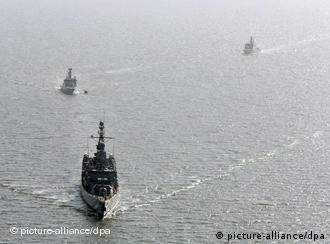 German ships setting out for Lebanon

The episode occurred when Israeli jets scrambled after a helicopter took off from a German frigate serving with a United Nations Interim Force in Lebanon (UNIFIL) task force. German Defense Ministry spokesman Thomas Raabe said six Israeli F-16s had flown very low over the German vessel and one of them fired two shots near the ship.

An Israeli army spokeswoman said the helicopter did not coordinate his plan with Israel before taking off. As a result, Israel sent fighter jets into the air, forcing the helicopter to return to the German vessel and land.

The Israeli military, however, denied having fired any shots in the incident, which happened near the border with Lebanon close to the border town of Rosh Ha'Nikra. 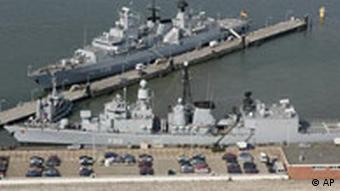 Jung is due to pay a visit to Israel next week, but Tuesday's incident is not expected to cast a cloud over the talks, diplomats said.

The German vessels are overseeing an arms embargo against the militant Shiite Hezbollah movement, following an August 14 ceasefire that ended 33 days of fighting between Israel and the Lebanese group.

Israeli jets over the past few days have intensified their activity over Lebanon by flying at low altitude and staging mock raids over areas in south and the capital, Beirut. 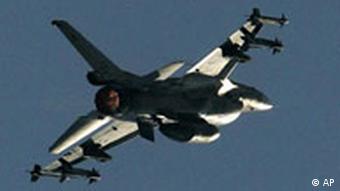 Such incidents are not considered serious in Israel, but UNIFIL's command has warned that the flights over Lebanon endanger the UN mission.

In another incident, a French patrol was forced to go on alarm stations early October after Israeli warplanes approached close to it and refused to respond to radio messages, Israeli reports said.

In a related issue, the German defense ministry denied a report in Thursday's Süddeutsche Zeitung newspaper claiming that the rules of engagement for the task force had been changed, restricting the scope of its operations.

Israel launched a wide-scale offensive against Hezbollah on July 12 after Hezbollah captured two Israeli soldiers in a cross-border raid and killed five others. The hostilities came to an end one month later after the UN Security Council adopted resolution 1701.

The resolution calls for a ceasefire and the deployment of UN troops alongside the Lebanese army along the border with Israel.

The German navy has taken over command from Italy of the UNIFIL peacekeeping force patrolling off the Lebanese coast, two months after a cease-fire ended almost five weeks of conflict between Israel and Hizbollah. (16.10.2006)

During a visit to the Middle East, EU foreign policy chief Javier Solana expressed concern at the absence of peace talks between Israel and the Palestinians and said the European Union was ready to offer its help. (26.10.2006)