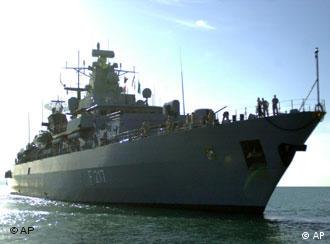 The German Navy's largest frigate, the Bayern, will lead the Bundesmarine mission

The ceremony was also attended by United Nations Interim Forces in Lebanon (UNIFIL) commander Major General Alain Pellegrini who hailed the Italians' mission -- which helped end a crippling Israeli blockade of Lebanon -- as "a real success."

Germany has agreed to send up to 2,400 military personnel to Lebanon in the country's first mission in the Middle East since World War II. 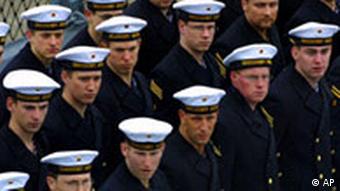 The German force consists of around 1000 marines

A German maritime fleet of eight ships including two frigates with about 1,000 soldiers on board arrived off Lebanon early October with a mandate to intercept arms shipments to the Shiite militia Hezbollah.

Krause accepted what he called a "truly demanding mission," saying his force was "prepared and ready to react when the situation demands."

Although Germany has committed ships to UNIFIL, having troops on the ground is a more sensitive issue because of the potential of conflict with Israeli troops.

De Giorgi hailed the "excellent" cooperation of the Lebanese navy, telling the Lebanese people that "you cried out your right to life (and) you shall rise up again." 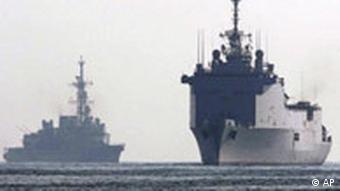 French and Italian ships make way for the Germans

Lebanese deputy chief of staff for naval operations, Brigadier General Hassan Mohsen, expressed his "deep thanks and appreciation to Italy for their help after the last Israeli aggression" saying he hoped his under-equipped navy would soon have "the right equipment to lessen the UN's responsibility."

The initial naval force consisted of Italian, French, Greek and British ships and will now be replaced by a force from Bulgaria, Denmark, Germany, Greece, Norway, Sweden and Turkey.

Britain's Royal Navy said in a statement that during its mission the taskforce had "challenged over 1,000 vessels approaching Lebanese waters ... a handful were handed on to Lebanese authorities."

UNIFIL is enforcing a truce which ended fierce conflict between Israel and Lebanon's Hezbollah militia in July and August which left around 1,200 civilians in Lebanon and 162 Israelis dead. The war was sparked by the capture of two Israeli soldiers by Hezbollah.

Germany on Monday said Lebanon has asked for the German navy to take part in the expanded United Nations force in the war-ravaged country, but its mandate still needs to be defined. (11.09.2006)

German Foreign Minister Steinmeier said Thursday that all formalities had been fulfilled for German naval units to help Lebanon patrol its territorial waters to prevent the running of arms. (07.09.2006)

Lebanese Prime Minister Fuad Seniora said Monday that Lebanon was drafting a letter to the UN formally requesting that Germany participate in the UN force in the country. (04.09.2006)