Germany's parliament is considering a house ban on the Canadian and US Israel critics who pursued Left party whip Gregor Gysi into a washroom. Gysi has since made light of Monday's incident. 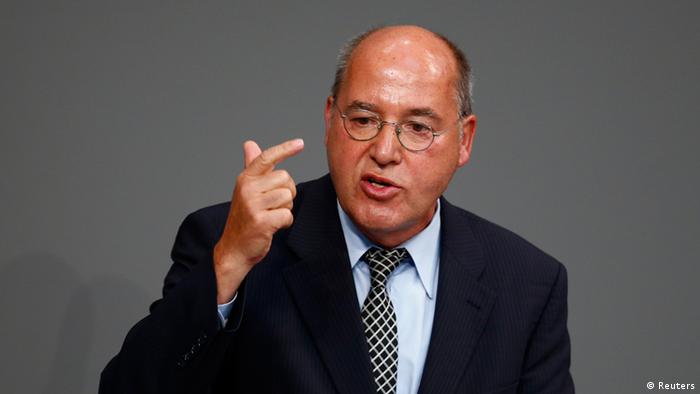 Multiple video footage of Monday's incident showed Canadian David Sheen in pursuit of Left Party Gregor Gysi in a corridor near his parliamentary office while accusing the veteran leftist politician of labeling him "anti-Semitic."

Gysi, himself of partial Jewish origin, has since denied that he had described the two publicists as "anti-Semites."

Moments beforehand, Max Blumenthal, a pro-Palestinian Jewish US writer, had accused German parliamentarians of remaining silent on the fate of Palestinians and of trying to "crush" the voices of "dissidents" such as Sheen.

Sheen, who has lived for some years in Israel, and Blumenthal had been invited into parliament's bureau zone by three members of Gysi's own Left party caucus.

Lammert said "any attempt" to exert bodily or psychological pressure on parliamentarians and thereby endanger them in their carrying out of parliamentary duties was "unacceptable."

The rhetorically vocal Gysi, who leads the opposition Left party, became prominent in the 1980s as a lawyer in East Germany.

On Wednesday, the German broadsheet Bild quoted Gysi as saying that Monday's "atmosphere was very aggressive," but added that he did not want to turn the washroom incident into an "affair of state."

"I will not report on my visit to the toilet," he told reporters in Berlin on Tuesday.

Gysi confronted by publicists in corridor

In the video footage, Blumenthal is heard asking Gysi as he walks past the camera and down the corridor toward the washroom: "Why won't you address these allegations you made against us?"

On Tuesday, the Left parliamentary caucus said it had accepted an apology, also addressed to Gysi, from Inge Höger, Heike Hänsel and Annette Groth, the three members who had invited the publicists into the parliamentary building.

According to the Left, the caucus had declined to admit the pair to a party discussion round because its composition would have been too one-sided.

"We will not cooperate with those who treat us or our comrades so hostilely as on this 10th of November," the Left caucus announced in its statement.

The US-based Jewish newspaper Algemeiner and the Jerusalem Post reported that Blumenthal and Sheen had been denied podium speaker appearances in Berlin's Volkstribune theater on Sunday, when Germany remembered Jews victimized during the 1938 Kristallnacht pogrom.

In a cross-party letter, three senior federal parliamentarians, including Volker Beck of the opposition Greens, had written jointly to the theater's management, urging them to reconsider its invitation to the "one-sided, biased speakers."