Members of the militant "Islamic State" group have kidnapped dozens of Christian families after seizing control of a town in the central Homs province. IS has accused the civilians of colluding with the Syrian regime. 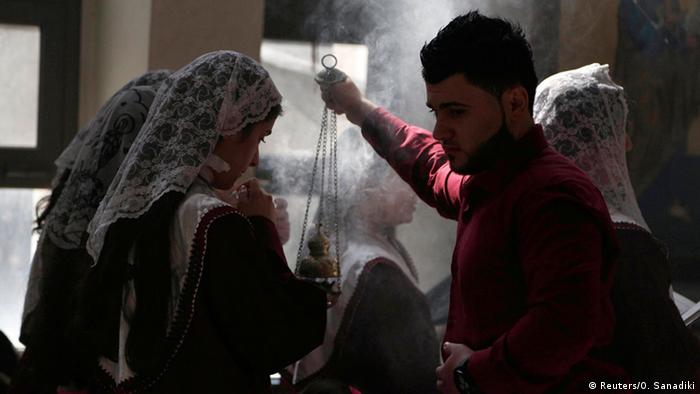 More than 200 civilians were kidnapped by "Islamic State" (IS) militants a day after the jihadis annexed the town of Al-Qaryatain, the UK-based Syrian Observatory for Human Rights reported Friday.

"Daesh kidnapped at least 230 people, including 60 Christians, during a sweep through Al-Qaryatain," Syrian Observatory for Human Rights chief Rami Abdel Rahman said, using another name for IS.

The terrorist group had accused the civilians of "collaborating with the regime," Rahman added. The jihadis had a list of civilians they wanted to track down, making it nearly impossible for families to flee the militants.

Annexed by IS on Wednesday, Al-Qaryatain is located in the central Homs province and is situated near a road linking the ancient city of Palmyra to the Qalamoun Mountains along the Lebanese border. Many Christians had fled to the town to escape fighting in Syria's northern Aleppo province.

Nearly 18,000 people, including Sunni Muslims and Christians, lived in the town before fighting began. The population of the area has been now reduced to only about 300.

IS fighters consider Christians to be infidels. Earlier this year, the jihadis kidnapped 250 Assyrian Christians during raids on several villages in northeastern Syria. The fate of many of these hostages is still unclear.